Contains threads on British Army equipment of the past, present and future.
Post Reply
3 posts • Page 1 of 1

Introduction
The FV4030/4 Challenger 1 is a British main battle tank (MBT) used by the British Army from 1983 to 2001, when it was superseded by the Challenger 2. It is also currently used by the Royal Jordanian Army as its main battle tank, after heavy modifications. The variants for the Jordanian military are to be upgraded using the unmanned Falcon turret.


History
The Challenger design by the former Military Vehicles and Engineering Establishment (MVEE) near Chobham in Surrey originated in an Iranian order for an improved version of the Chieftain line of tanks in service around the world. These were the Chieftain Mk5(P)- FV4030/1, FV4030/2 Shir (Lion) 1 and 4030/3 Shir 2. With the fall of the Shah of Iran and the collapse of the UK MBT90 project, the British Army became the customer and the tank was further developed by MVEE to meet Western European requirements. For a short time the tank was named "Cheviot" (the name of a hill range) before becoming "Challenger", a name reused from the Cruiser Mk VIII Challenger tank of World War II.

The most advanced aspect of the Challenger 1 design was its Chobham armour, which gave protection far superior to any monolithic Rolled Homogeneous Armour (RHA), then standard of western tank armour material. This armour was later adopted by other designs, including the American M1 Abrams. Additionally, the hydropneumatic suspension provided outstanding cross-country performance through the long suspension arm travel and controlled bump and rebound behaviour offered.

The Challenger was built by the Royal Ordnance Factories (ROF). Challenger 1 entered service with the British Army in 1983 and production ceased in 1990 at a cost of around £2 million each. In 1986, ROF Leeds (and the Challenger production line) was acquired by Vickers Defence Systems (later Alvis Vickers). Jordan initially purchased 274 Challenger 1 tanks. Under an agreement signed in March 1999, another 288 surplus Challenger 1s were supplied to Jordan over a three-year period, which enabled the Jordanian Centurion fleet (known locally as Tariq) to be replaced.

The Ministry of Defence was keen to show off the capabilities of the Challenger 1 in the Canadian Army Trophy Competition (CAT '87), held at Grafenwöhr, West Germany, in June 1987. The best performing team in preparatory competitions had been the 2nd Royal Tank Regiment, although its Challengers had not been fitted with Thermal Observation and Gunnery Sight (TOGS), which would put them at a disadvantage. The Royal Hussars had a squadron fitted with TOGS; however, they had been training at BATUS in Canada with Chieftains, instead of training with Challenger and TOGS for CAT '87. Twenty-two new Challengers with TOGS were specially diverted from the production line for the competition, resulting in teething problems. At the competition itself, the Hussars managed some creditable scores but overall, their three "platoons" were placed last in the league table. In a statement to the House of Commons on 14 July, Ian Stewart, the Minister of State for the Armed Forces, said; "I do not believe that the performance of tanks in the artificial circumstances of a competition, such as the recent Canadian Army Trophy, is a proper indication of their capability in war." Following poor results in 1985 with Chieftain, and in 1987 with Challenger, the British Army decided in December 1987 to withdraw indefinitely from the competition.

A requirement for a new MBT was later issued. Proposals put forward for the new specification included an improved Challenger from Vickers, the American M1 Abrams, the French Leclerc, and the German Leopard 2. The Vickers Defence Systems design, designated Challenger 2, was eventually selected. This tank is significantly more capable than its predecessor: based on the same basic MVEE-designed hull, it features a new turret based on the Vickers Private Venture Mk7 design and improved Chobham armour.

There was also a Challenger Marksman SPAAG version, equipped with the Marksman turret. Withdrawals of British Army Challenger 1 began in 1998 and it had been completely replaced by Challenger 2 by 2001. 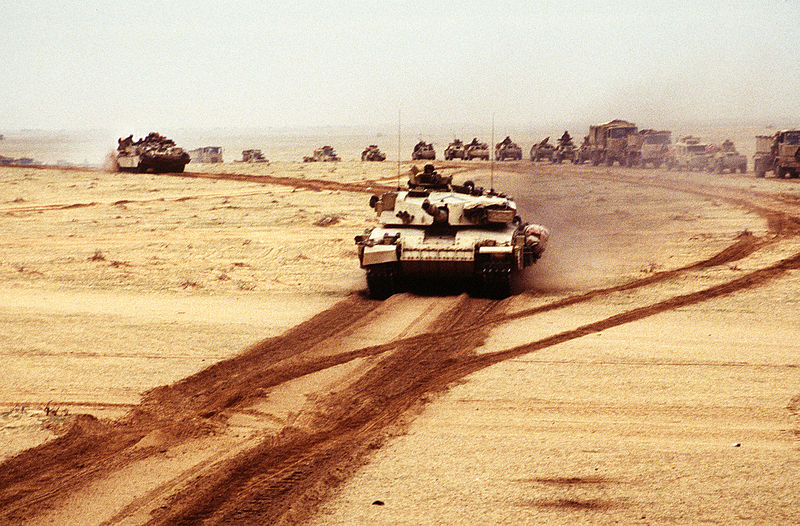 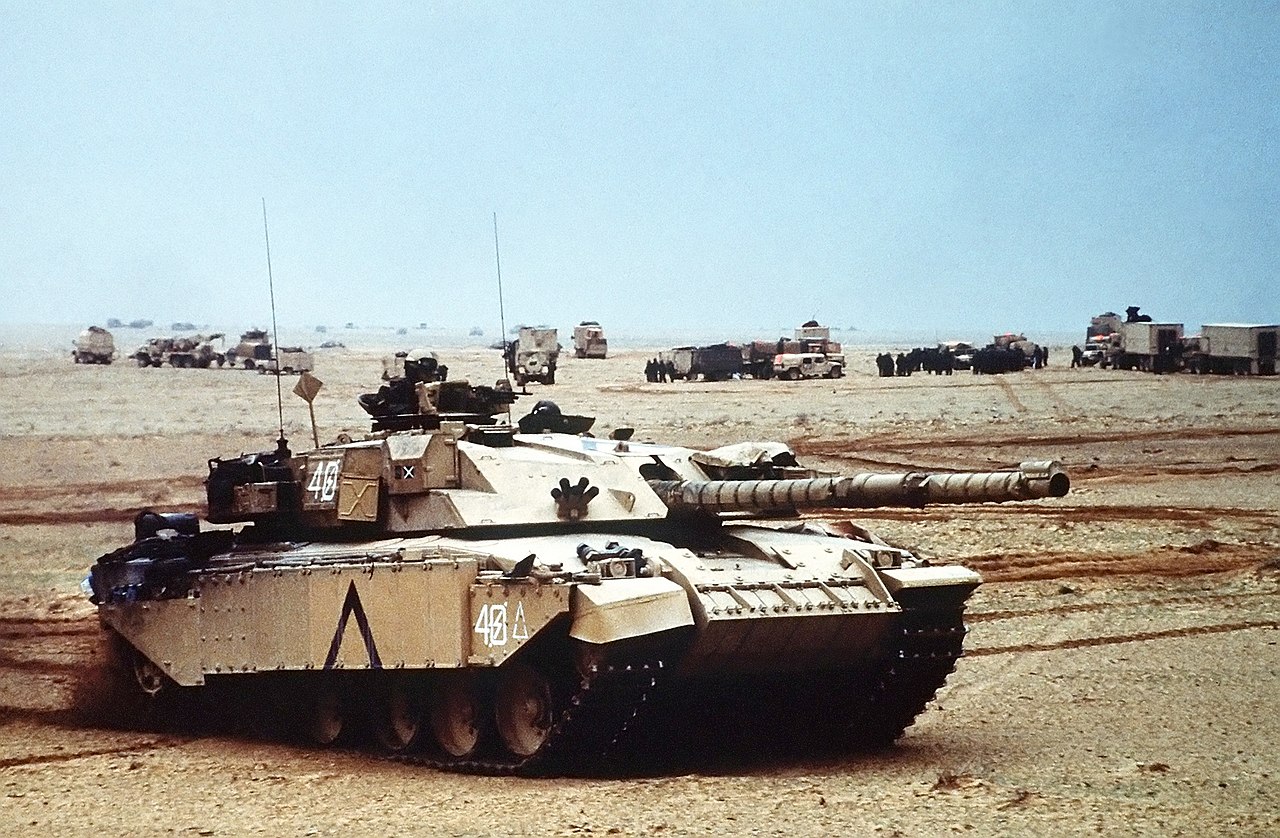 Operational Service
221 Challenger tanks were deployed to Saudi Arabia for Operation Granby, the UK operation in the Persian Gulf War. In the original deployment, the 7th Armoured Brigade included two armoured regiments, the Queen's Royal Irish Hussars and the Royal Scots Dragoon Guards, both equipped with 57 of the latest Mark 3 version of the Challenger 1. They were modified for desert operations by a REME team and civilian contractors at the quayside in Al Jubayl, Saudi Arabia. This fit included additional Chobham Armour along the hull sides and explosive reactive armour (ERA) on the nose and front glacis plate. Modifications also included the provision of extra external fuel drums and a smoke generator.

There were major concerns about the reliability of the vehicle. In addition there were serious worries about how a tank designed to perform in temperate climates would stand the rigours of desert warfare. Before the commencement of the Gulf War deployment only 22% of Challenger 1's were operational because of faults and lack of spares.

On 22 November 1990, it was decided to add the 4th Mechanized Brigade to the force, under the umbrella of 1st (UK) Armoured Division. The new brigade had a single Challenger regiment, 14th/20th King's Hussars, equipped with 43 Challenger 1 tanks and reinforced by a squadron of the Life Guards. They were equipped with the Mark 2 version of the tank, which was upgraded by armouring the storage bins for the 120 mm charges as well as the additional armour fitted to the Mark 3's.

During Operation Desert Shield it was decided that the 1st (UK) Armoured Division would be placed under the command of the US VII Corps. This corps would form the armoured fist of the Coalition forces, tasked with destroying the bulk of the Iraqi forces. The forces of VII corps crossed the Saudi border into Iraq, and then crossed into Kuwait. The 1st (UK) Armoured Division was the easternmost unit in VII Corp's sector, its Challenger tanks forming the spearhead of the advance. The division advanced nearly 350 km within 97 hours, destroying the Iraqi 46th Mechanised Brigade, 52nd Armoured Brigade and elements of at least three infantry divisions belonging to the Iraqi 7th corps in a series of battles and engagements. They captured or destroyed about 120 tanks and a very large number of armoured personnel carriers, trucks, reconnaissance vehicles, etc.

The main threat to the Challenger was deemed to be the Iraqi Republican Guard's T-72M tanks; each British tank was provided with twelve L26A1 "Jericho" depleted uranium (DU) shells specifically for use against T-72Ms, but during the course of the Coalition's ground campaign none was encountered as the division was withdrawn beforehand.

In action, the Global Positioning System (GPS) and Thermal Observation and Gunnery System (TOGS) fitted to the Challengers proved to be decisive, allowing attacks to be made at night, in poor visibility and through smoke screens. In total, British Challengers destroyed roughly 300 Iraqi tanks without suffering a single loss in combat. Patrick Cordingley, the commander of 7th Armoured Brigade, said afterwards that "Challenger is a tank built for combat and not competitions."

On 26 February 1991, a Challenger achieved the longest range confirmed kill of the war, destroying an Iraqi tank with an armour-piercing fin-stabilized discarding-sabot (APFSDS) round fired over a distance of 4,700 metres (2.9 mi)—the longest tank-on-tank kill shot recorded. 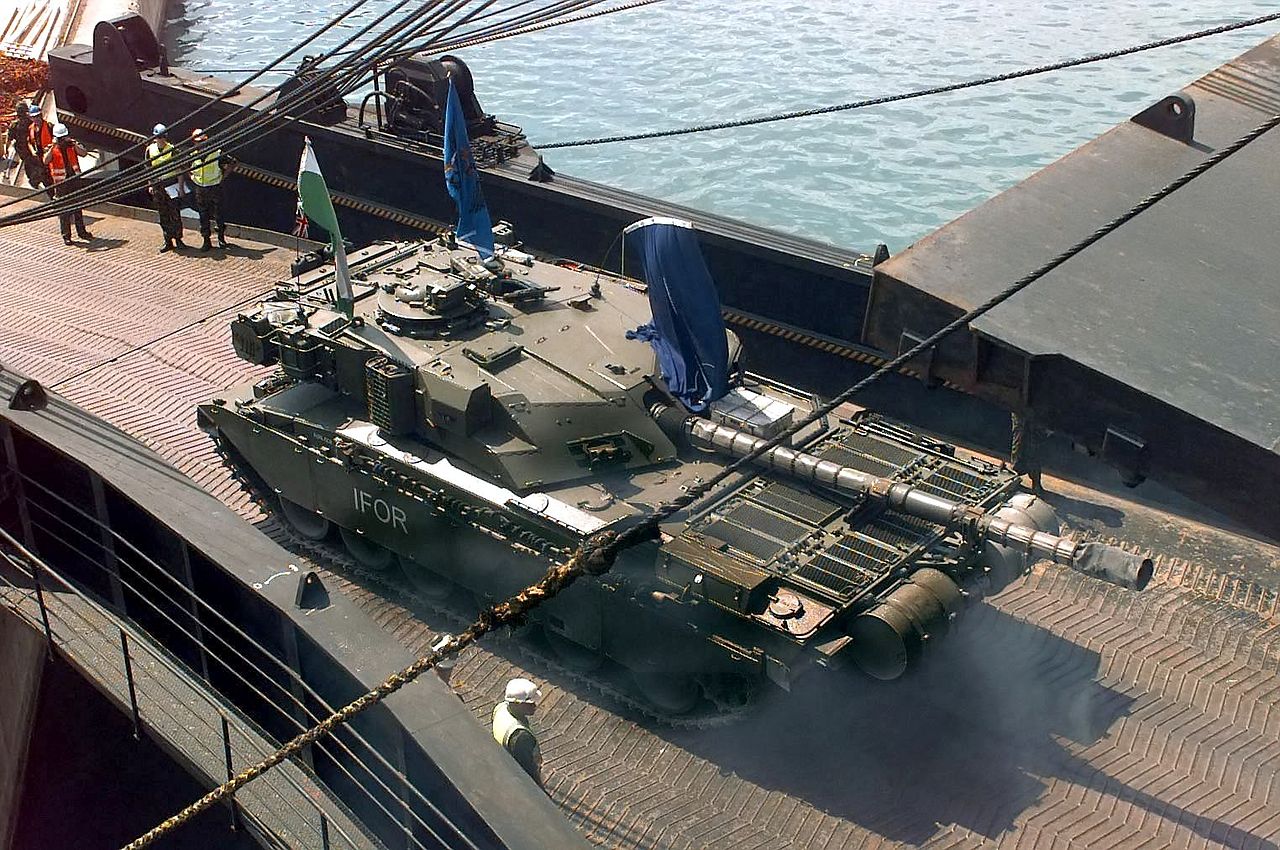 Challengers were also used in 1999 by the British Army in Bosnia and Herzegovina and Operation Joint Guardian, the NATO-led drive into Kosovo.

David Willey, The Tank Museum Curator, discusses the development and deployment of the UK's Main Battle Tank from 1983 - 2001, the Challenger 1.