Contains threads on Royal Navy equipment of the past, present and future.
Post Reply
366 posts

ETH wrote:Any ideas what this could entail?

My guess is expanded aviation and C2 facilities at a minimum.

Yes, but these ships were designed as Logs(Aux) until that ran into the problem that there was no such NATO classification, so they are now called 'something' else
... what I am aiming at is habitability, over a long period of bob'bing up and down close to someone's coastline.

the referenced paper was targeting the conversion for the EoS, while the other one would be an Albion (we already have it) for WoS
- so for that one the only change would be if we were to send it to the G of Guinea, to chase pirates there (the drug smugglers of the Caribbean are already being chased by using other, cheaper assets).

Why do I mention 'habitability'?
- bcz the 'reaction group' has been indicated to be abt 200-strong
- when you take away the helicopter component and the boats/ LCVP handling, that makes for c. 150 pairs of boots

But all 200 hundred will be not just taking up space, but also loading ship's "services"... that were not designed in

BTW: Congrats on the choice of your profile picture. Whether you meant it (or not?) it nicely sends the message that
"capability hols can be taken; BUT they may cost you"... or would a better 'technical' term be: come back and bite you in the bum

We have seen this group deploy once EoS in 2018 twice to the Baltic in 2019 and once to the Med in 2020 ( on one of the Baltic trips the T-45 was replaced by a T-23 ). So the big question is if we are converting a Bay class for the EoS LRG what will this group look like give it will need to operate in the Indo-Pacific

A single T31 simply isn't sufficient without an adequate ASW capability. Additional Merlins and P8's may help but would this affect the CSG?

My understanding was that the T32's were to be specifically tasked with protecting the LRG(s). Until then any LRG will have to contain at least one T23 possibly backed up by a T31 also. As distributed assets most of the time and only pulling together to form the LRG as required, freeing up a T23 occasionally shouldn't be too onerous.

It would be good to know if the Bay is too be converted prior to Argus decommissioning around 2024 and if another Bay will be converted down the line.
Top

Poiuytrewq wrote:if another Bay will be converted down the line

I hold out hope that at least 2 of the 3 are converted, along with both LPDs back in active service together. It kills me that we are still wasting the kit the RN already has.
”We have no eternal allies, and we have no perpetual enemies. Our interests are eternal and perpetual, and those interests it is our duty to follow." - Lord Palmerston
Top

You are right that T-32 will end up protecting the LRG's however for now T-31 will have to fill that set of boots. I do have to say I wish we would do thing properly and have both LPD's and convert 2 Bay's and finish it off with fleshing out T-31 to do the job of protecting them
Top

First time landing of an Osprey: 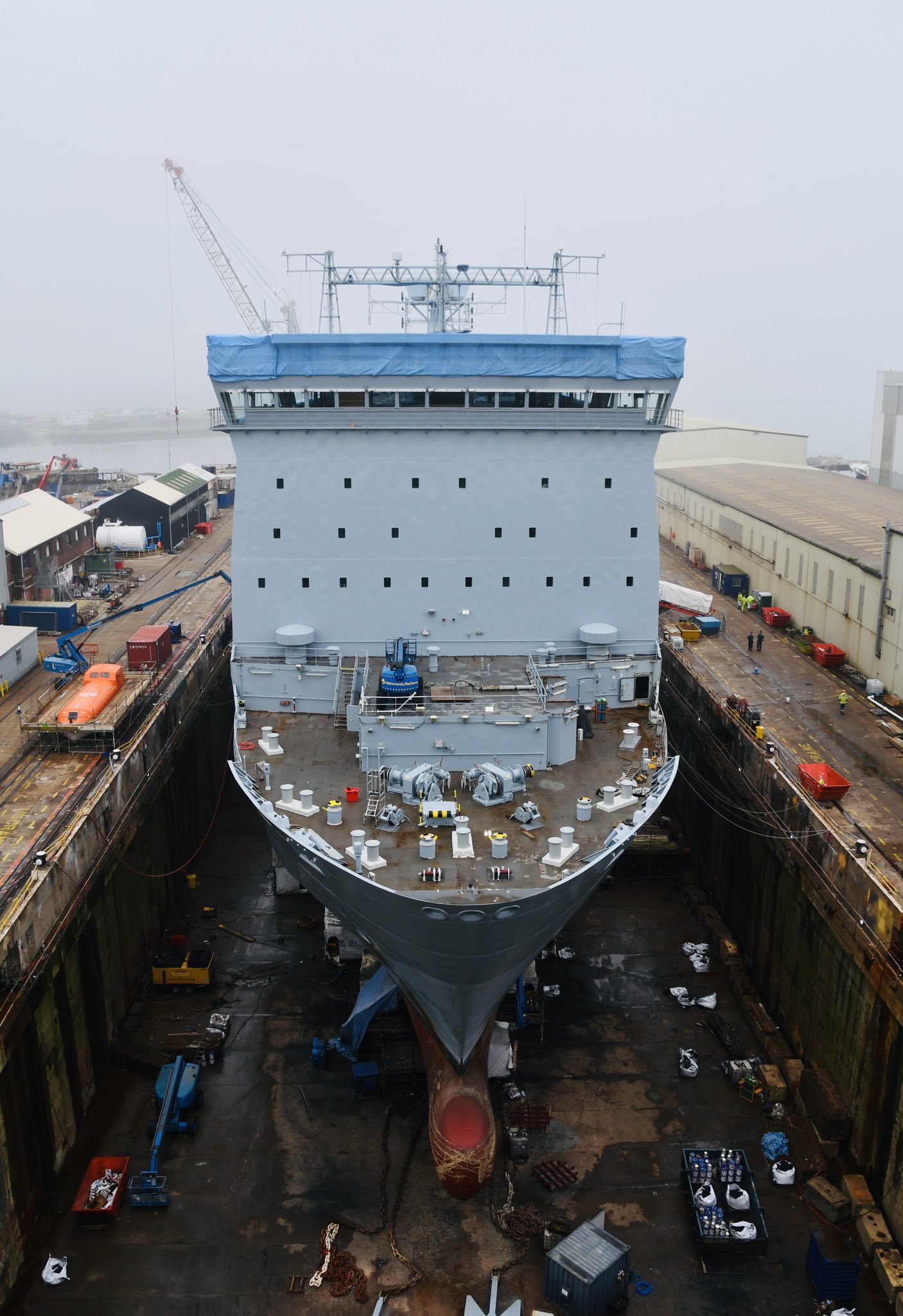 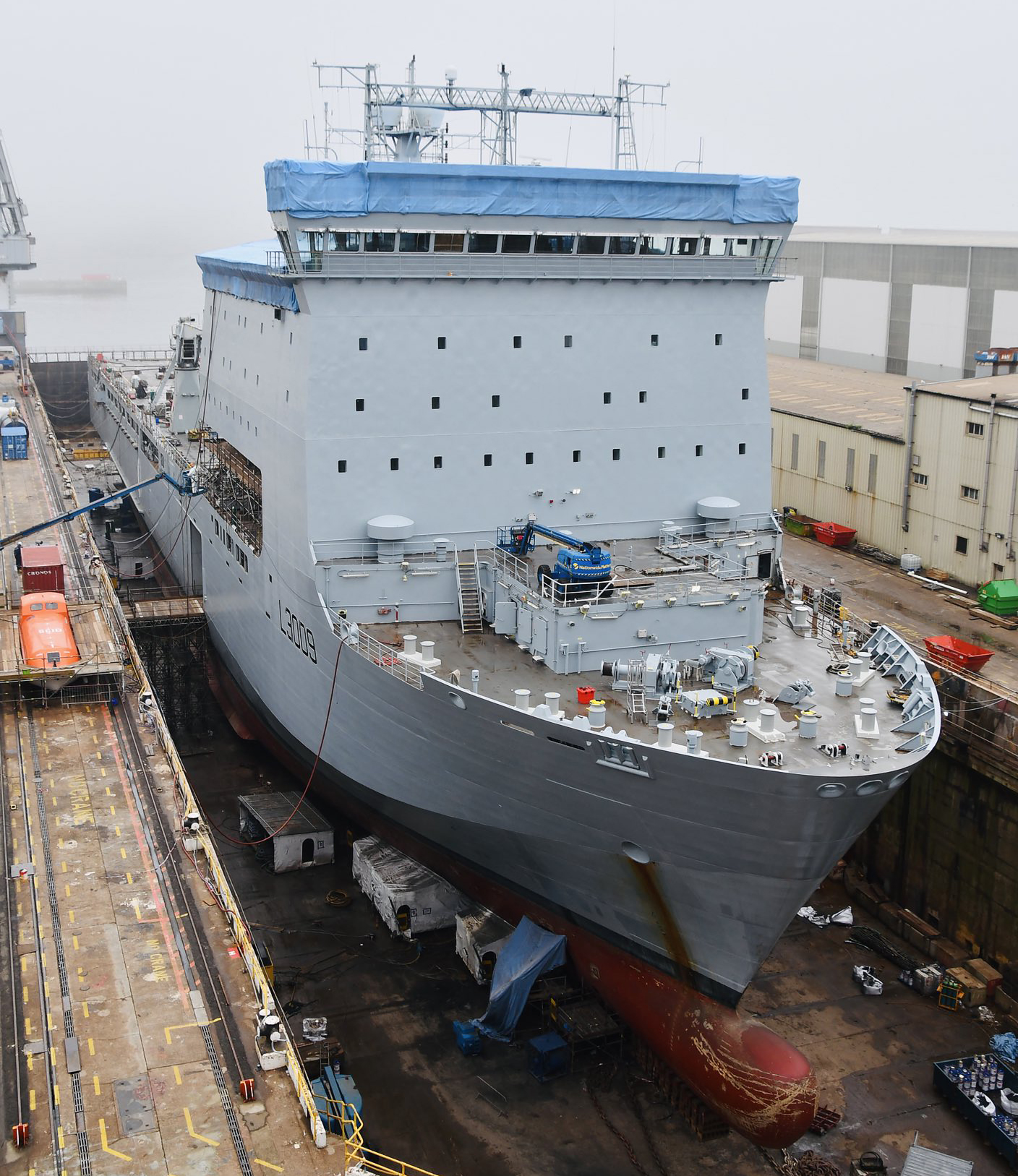 Shame that at the same time they are not adding the permanent hangar and making all the changes to suit the LRG role!!!
Top

RFA Lyme Bay will be getting some sort of hangar, soon (hopefully).

They may not have a future as amphibious assets but as support vessels for USVs etc they should still have a few years left. They more expensive to operate Albions will probably go before them.
Top

The Bay in front, TideForce behind. But, around the bow of Tideforce, 3rd small ship is located. Hull painted in gray/dark-gray and bridge in white. Surely not a commissioned RN vessel, but it could be the ~50m fast crew supply ship ordered a few months ago? (may be not...) 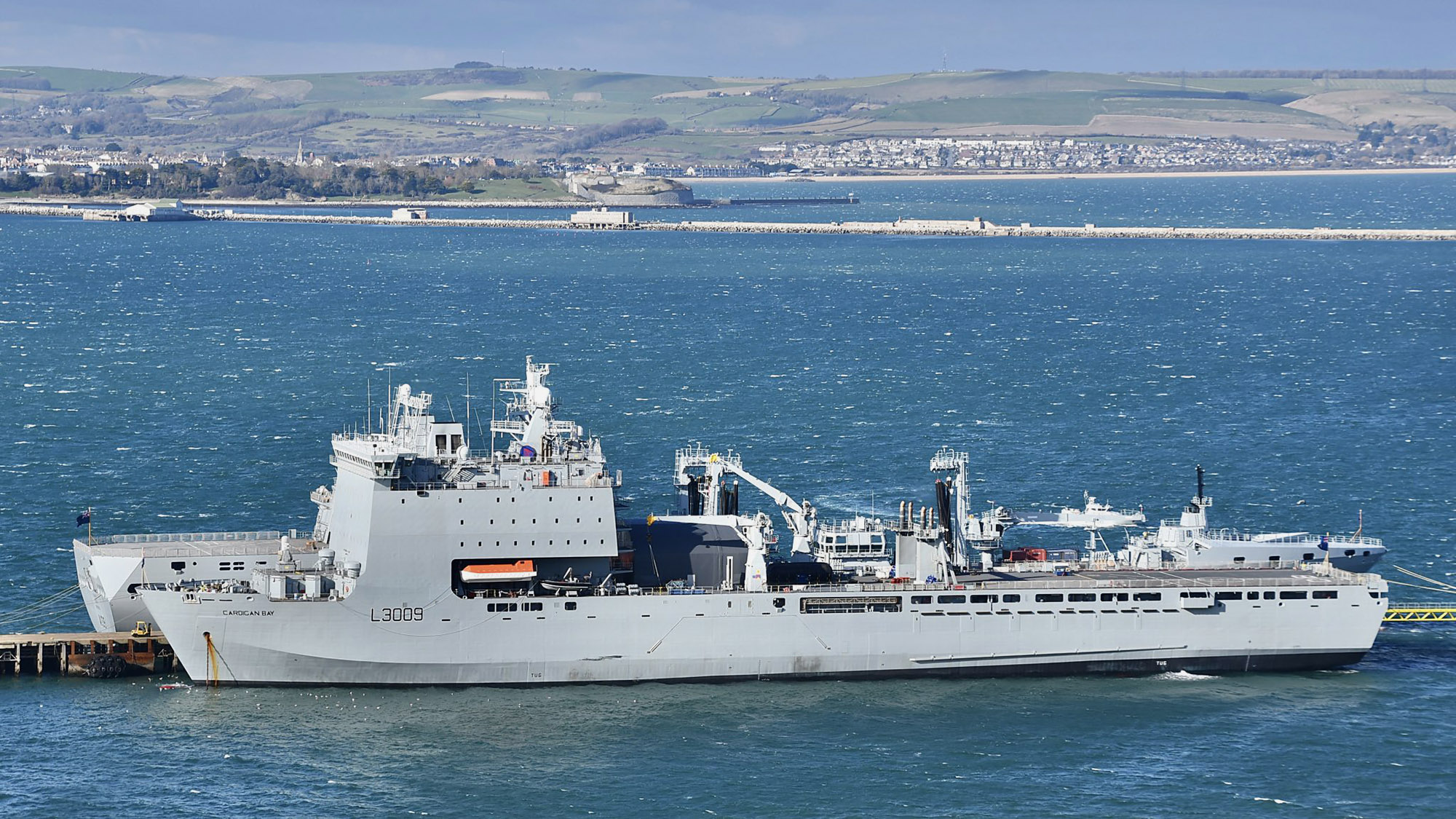 Looks like a Scimitar class to me?
”We have no eternal allies, and we have no perpetual enemies. Our interests are eternal and perpetual, and those interests it is our duty to follow." - Lord Palmerston
Top

These users liked the author SKB for the post:
donald_of_tokyo

Informative photo. Assembling the propulsion system to the mexefloat.

These users liked the author donald_of_tokyo for the post:
Poiuytrewq