Timmymagic wrote: ↑08 Jun 2022, 12:12 But...I've just noticed, not sure why I missed this, that the missile proposed is essentially a ground launched Remote Carrier 200...which then gives us a real appreciation of its range, which hasn't been stated before, we now can be very sure that it is well over 500km, probably considerably so...

by Timmymagic
Very interesting concept from MBDA Deutschland. An anti-uav capability using a version of the Enforcer missile. It won't be very long ranged or very fast so no real chance of it being a SHORAD system. Could engage helos out to 3-4 km potentially but that would be it. Be interesting to see what ceiling it could reach to defeat a target like Orlan 10. Radar, E/O/IR, 18 missiles and a 7.62 MG...

by Timmymagic
Related to Tempest...

At the Farnborough International Airshow 2022, MBDA is presenting, as part of Team Tempest on the Future Combat Air System (FCAS) stand, its vision for optimising weapon effects in the future battlespace through its Weapon Effects Management System.

As part of its involvement in the FCAS programme, MBDA is developing a Weapon Effects Management System. Working closely with our partners in the programme, the concept intends to deliver software that works in harmony with the core platform's mission systems and sensor suite, providing the best threat response, deployable at the most opportune moment, therefore maximising the overall mission effectiveness.

In an ever increasingly complex operating environment, a pilot - or even remote operator - will need the assistance of the Artificial Intelligence (AI) and Machine Learning (ML) of a Weapon Effects Management capability to reduce their cognitive burden and facilitate the coordination of all available complex weapons in a battle space.

It may also be that the best effect does not come from the system's core platform, but an un-crewed adjunct or UCAV or even from wider in the battlespace such as a ground or naval-based systems, or a combination of them. An additional capability of the system is to exploit sensing and data-linking capabilities on an Effector to contribute into a mission system thus increasing situational awareness This is what MBDA's weapon effects management capability aims to manage for the pilot, providing them with the optimal solution to choose from before they even have to think about it.

Chris Allam, Managing Director of MBDA UK and Executive Group Director of Engineering, said: "At MBDA, we know that networked weapons, cooperating in packs, or even swarms, will provide an operational advantage in the future battlespace. The Future Combat Air System will also have the information advantage in that same space. Coupling the two, the vision for the Weapon Effects Management System is to enable true effects optimisation, making complex weapons simple."

Lorenzo Mariani, Managing Director of MBDA Italia and Executive Group Director of Sales and Business Development, said: "MBDA is able to provide customers with the ability to co-operatively manage effects, including all the technologies needed to defeat increasingly challenging future threats. These capabilities will be the basis of best-in-class next-generation multi-domain systems. The FCAS programme is a further great opportunity to co-operate internationally and leverage each country's advanced capabilities to offer the market new cutting edge performances".

Working as part of Team Tempest from the outset of the programme enables MBDA to concept and assess this weapon effects management system alongside all the other partners in the FCAS programme, in keeping with the objective of designing a system from sensors through to effectors from the outset.

by Timmymagic
Looks like CAMM is getting another big order for at least 700 missiles and more launch vehicles under the Polish Pilica programme. This is seperate to the already announced NAREW programme that will adopt CAMM and CAMM-ER into Polish service. The Pilica system will provide close in protection for the Polish Patriot batteries when delivered. 21 batteries are being procured. Looks like a development that has come about because of Ukrainian experience, originally it was only going to have AAA and Piorun missiles. 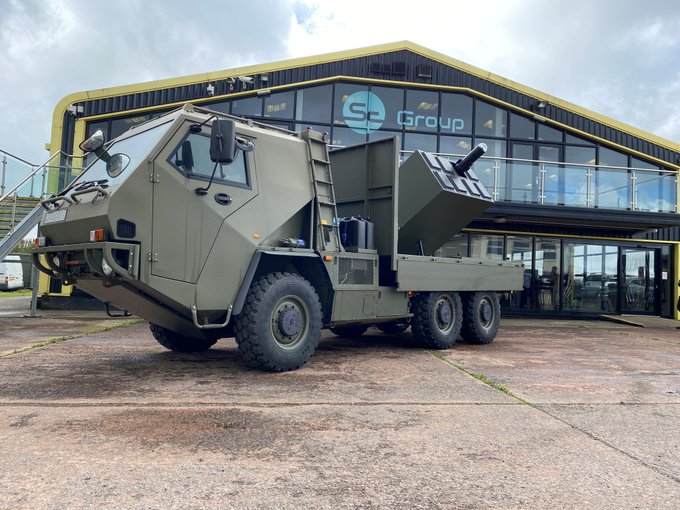 by Lord Jim
One of the big advantages of the CAMM weapon system is that it is Radar agnostic, in other words it can be made to work with almost any radar.

Timmymagic wrote: ↑17 May 2022, 09:28 Poland has selected Brimstone as the armament for their Tank Destroyer vehicles...

Think the UK may end up as the third ground user of Brimstone in due course (although there is a very real chance that other countries will get there ahead of the BGOAA requirement...wonder if the AH-64E integration might come in to play again...because Poland is looking to buy AH-64E...Qatar and Saudi also use AH-64E and are Brimstone users...

And all the experience from Ukraine makes it clear that AH need stand off missiles to survive...JAGM is not in the same league as Brimstone in that regard...or Spike NLOS for that matter...

Others have reached the same conclusion...surely MoD needs to reconsider now...

by Little J
If the MoD's excuse was cost of integration (can't remember if it was or not), then that doesn't hold water anymore surely... Brimstone for the win

£50m was the amount quoted...for a weapon with double the range that clearly dramatically increases the platforms survivability. Which to be frank at present must be questionable with shorter ranged weapons.

Otherwise we might as well ditch Hellfire and JAGM and just load up on CRV7 for some ballistic rocketry action like the Ukrainian's and Russian's use their AH for...

by NickC
Please correct me if wrong but one lesson from Ukraine is that helicopters, including attack helicopters, are not survivable on battlefield if within range of missiles like Starstreak etc.

The US Army have been test firing the Spike-NLOS at ranges of up to 23 miles from the Apache and making an interim buy of 205 for $41 million, $210,000 each, (they cancelled the NetFires with similar claimed capabilities in 2011 after $1 billion spend). The US Army is currently seeking a Long Range Precision Fire missile for its planned FARA scout/light-attack helicopter and a shoot-off between candidates is/was planned for late this year.

Just as important as the missile will be the intelligence required of where to target these expensive missiles before launch and also raises the question do you need an expensive helicopter as the Apache with its many other capabilities for firing NLOS missiles if just standing off twenty miles behind the front line,would not a Wildcat or similar be just as effective?

My general impression which think correct is the Russians did not use their numerous attack helicopters, Mi 24 and Ka 50 etc, to try to help stem the recent advance by the Ukrainian Army attack in the north east and the end result the Russian Army's ignominious retreat back towards the Russian border.

Or that like everything else in their armoury it is poorly maintained and the crew poorly trained.
All times are UTC+01:00
Page 11 of 11