Contains threads on equipment developed by the UK defence and aerospace industry, but not in service with the British Armed Forces.
Post Reply
227 posts

A thread to discuss all matters on national ship building.
@LandSharkUK
Top

marktigger wrote:and if scotland goes independent then was it such a good idea putting all the eggs in one basket?

There is really no choice. The UK cannot sustain more than one complex warship factory so there is no choice but to put all our eggs in one basket.

The choice is between either Southampton or Glasgow, so the government chose to stimulate the poorer area, which is completely sounds reasoning. The neverendum question does throw a spanner in the works, but assuming a Scotland within the United Kingdom a single factory there is a desirable outcome.

If the Clyde does end up outside the United Kingdom then we are screwed, but until then I don't see any other option. Not committing to Scotland will see them leave which will slash the defence budget, and again we are screwed.
@LandSharkUK
Top

We cannot continue pampering the Scots and hoping they will stay. For long-term stability we need to move all naval ship building back to England.

I would also bite the bullet and move our SSBN fleet (and maybe SSN fleet too) to Kings Bay, Georgia, USA. This would be significantly cheaper than relocating to England. If we want to maintain a nuclear deterrent, this is the best option. For the laughs, call it HMS Scotland / HMNB Scotland.

If Scotland wants to leave, they will leave. Building 8 frigates on the Clyde over 16 years wont change a damn thing.
Though we are not now that strength which in old days moved earth and heaven, that which we are, we are. - Lord Tennyson (Ulysses)
Top

It's hardly pampering, it's investing a fair percentage of their taxes back into their local economy.

For long term stability we need a strong England Ireland Scotland and Wales, all part of the same United Kingdom, more now then ever post brexit desicion. That means building tanks in Wales, missiles in northern island, fighter jets in England and warship's in Scotland.

Alienate the area further and it will push them closer to an exit which will have profound and permanent effects of defence.
@LandSharkUK
Top

There has to be a second complex warship builder that's not BAE:
For competition reasons and political (if Scotland goes independent)
In order to achive that money has to be spent and a 10-15 year programme put in place.

On the Clyde
The 8X Type 26 Built on the Clyde at scotstown (followed by AA version of T26 to replace T45)
The 3 Mars SS built at Govan+A&P+ H&W and assembled at Rosyth (followed by Argus, and then 2 LPHDs as an Albion and Bulwark replacements )

Ideally I would not replace Trident, this would free up funds more more SSNS, and Frigates, plush an LPHD,
Top

rec wrote:There has to be a second complex warship builder that's not BAE:
For competition reasons and political (if Scotland goes independent)
In order to achive that money has to be spent and a 10-15 year programme put in place.

On the Clyde
The 8X Type 26 Built on the Clyde at scotstown (followed by AA version of T26 to replace T45)
The 3 Mars SS built at Govan+A&P+ H&W and assembled at Rosyth (followed by Argus, and then 2 LPHDs as an Albion and Bulwark replacements )

Ideally I would not replace Trident, this would free up funds more more SSNS, and Frigates, plush an LPHD,

rec wrote:There has to be a second complex warship builder that's not BAE

Whats the second one going to build? we have to buy stupid patrol boats because we cant manage to sustain one yard, never mind two.
@LandSharkUK
Top

We have two yards partly for competition and partly because Scotland is like to leave the UK at some point.
Top

I understand that logic, but what are they going to build?

With 19 (possibly 22 if we're lucky) complex warships on a 30+ year cycle it makes it extremely difficult to keep two yards busy, we would have to waste even more on crappy patrol vessels we don't need to want just to keep them occupied.

2 yards doesn't get us competition either. If it is government mandate to sustain two yards, any loosing bidder will rest safe in the knowledge they will get the next contract and it will be competition free again. The only way we could foster healthy competition is if the yards are commercially viable from private funding, running off private capitol for most of the work, and then fighting it out for the lucrative government orders.

Making UK yards competitive globally is going to be a hard battle.

It is almost certainly not going to happen. A much more reasonable approach is to build upon the work laid out in the carrier build and offer blocks of the T26 out to tender across the UK (globally?), and then assemble at a single frigate factory.
@LandSharkUK
Top

MCM/Hydrography fleet should be contracted to Babcocks at Appledore
Top

marktigger wrote:MCM/Hydrography fleet should be contracted to Babcocks at Appledore

With no competition??? Tut tut.
Top

That would be an opportunity missed. The way MHC is heading it could be built by any shipyard in the world. It should be an open competition to foster innovation and competition.

I think that program is the opportunity to significantly increase the Royal Navy's fleet size with some big utilitarian commercial hulls. Similar to TD's ship that is no a frigate. We could be aiming for ten "boaty Mc" type vessels, significantly boosting the navy's large hull fleet.

Those could be built at CA, appledoor, Damen, or any one else who can give us good value.

It would be a missed opportunity to just hand it to someone.
@LandSharkUK
Top

well the 4th Irish navy patrol vessel could be finished and I doubt now they will get more. The design could be from damen but it should be built in this country. But why should BaE be the only yard that gets business without it being bid for?
Top

Because they are the sole UK supplier of complex warships, producing to a standard few can match globally.

Its a completely different game to commercial hulls, where there are 100 acceptable suppliers and no national secrets to guard.
@LandSharkUK
Top

They are now about 10-15% more competitive than they were a few weeks ago.
Top

If Scotland goes independent, they could be as competitive as Korea.
Top

They are now about 10-15% more competitive than they were a few weeks ago.

Reversing the Thatcher factor: there was not much of industrial exports left after she let Sterling float (up, by 16%)
Ever-lasting truths: Multi-year budgets/ planning by necessity have to address the painful questions; more often than not the Either-Or prevails over Both-And.
If everyone is thinking the same, then someone is not thinking (attributed to Patton)
Top

ArmChairCivvy wrote:
Reversing the Thatcher factor: there was not much of industrial exports left after she let Sterling float (up, by 16%)

For whatever reason the pound has been over valued for decades, strangling UK industry.

It stands to reason that what manufacturing companies we still have will be highly efficient.

To the extent that the pound returns to more natural levels and stays there we could see a genuine industrial Renaissance in the UK.

I voted remain, but it's easy to imagine that there will be net benefits to *some* areas of the UK from Brexit. The North and the Midlands which still have some manufacturing probably.
Top

There may be a short or medium hit to confidence and the wider economy that might slow the rise in house prices, but I wouldn't bet on a house price fall in pounds.

Foreign owners will have seen a 10-15% drop in the value of their asset(s) with the fall in the pound, but for UK buyers the Bank of England is releasing more money for high Street banks to lend which should stimulate demand.

Ultimately the UK population is increasing by 300K a year and we're building around 100K homes a year.

Only one way that house prices will continue to go until that formula starts to change, or lending dries up.
Top

Should Rosyth's drydock #2 be dug out and enlarged to the same specification as the #1 QEC dock? 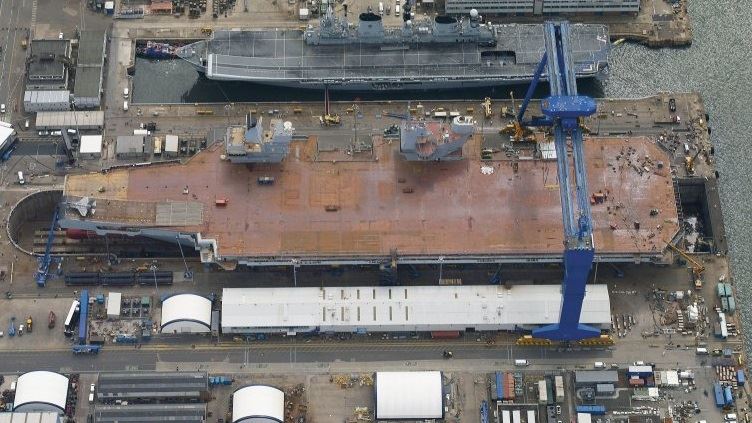 It will be interesting to see how strategic the shipbuilding strategy really is, and how much money is available post Brexit.

A lot depends on the cost of the Type 31. Ideally if a good asw escourt can be built for around 350-400 million producing in effect a modern T23 which can escourt carriers and auxilaries , then the T26s become the vessel that can be deployed independent of a carrier task group (a TAS equiped GP warship). If it's not possible to get a good quality smallish asw frigate for 350-400 million then we will end up with a beefed up corvette (stretched khareef or Venator 110). What ever happens 8 should be seen as the minimum viable number.

I think Camil Laird and Appledore should be in the T31 building programme.
Top

SKB wrote:Should Rosyth's drydock #2 be dug out and enlarged to the same specification as the #1 QEC dock?

What's the advantage of that?
@LandSharkUK
Top
Post Reply
227 posts