Contains threads on Joint Service equipment of the past, present and future.
Post Reply
3 posts • Page 1 of 1 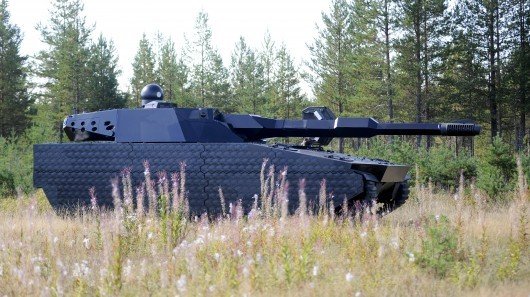 Introduction
Adaptiv is an active camouflage technology developed by BAE Systems to protect military vehicles from detection by near infrared night vision devices. It consists of an array of hexagonal Peltier plates which can be rapidly heated and cooled to form any desired image, such as of the natural background or of a non-target object.

Technology
In 2011, BAE Systems announced their Adaptiv infrared military camouflage technology, likening it to "a thermal TV screen". It uses about 1000 hexagonal panels to cover the sides of an armoured vehicle such as a tank or personnel carrier. Infrared cameras continuously gather thermal images of the vehicle's surroundings. The Peltier plate panels are rapidly heated and cooled to match either the temperature of the background, such as a forest, or one of the objects in the thermal cloaking system's "library" such as a truck, car or large rock. The system is able to gather and display thermal images while the vehicle is moving. The result is to "cloak" the vehicle from detection by heat-detecting night vision devices (thermographic camera systems).

For crypsis, the panels can display an infrared image of the vehicle's background; this can be updated as the vehicle moves. For mimesis, an image of a chosen object, such as a car, can be retrieved from Adaptiv's library and superimposed on the background. The illustration shows Adaptiv mimicking a four wheel drive car, using part of the panel, while the rest of the panel is cryptic, imitating the natural background. The technology is said to reduce the range at which a vehicle would be detected to less than 500 metres.

The panels forming Adaptiv's pixels are hexagons approximately 5.5 inches (14 cm) wide. They are robust, contributing to the armour of the vehicle that carries them. The system allows its operator to "grab" a thermal image from a vehicle or other object for display.

The company intends to develop a lighter version that could be used on helicopters. A version for ships could in principle use larger panels.


Adaptiv fitted to a demonstrator tank

Interesting.
Cost and complexity are likely to be the biggest hurdles to overcome.
Now if it could change colour and its radar reflectivity as well!
Top
Post Reply
3 posts • Page 1 of 1