Contains threads on Royal Navy equipment of the past, present and future.
Post Reply
28 posts

HMS Protector is a Royal Navy ice patrol ship built in Norway in 2001. As MV Polarbjørn (Norwegian: polar bear) she operated under charter as a polar research icebreaker and a subsea support vessel. In 2011, she was chartered as a temporary replacement for the ice patrol ship, HMS Endurance and was purchased outright by the British Ministry of Defence in September 2013.

From April 2011, she was chartered to the Royal Navy for three years as a temporary replacement for the ice patrol ship, HMS Endurance, and was renamed HMS Protector. The annual cost of the charter was £8.7m. In September 2013 the British Ministry of Defence purchased the ship outright from GC Rieber Shipping, for £51 million. In October 2013 the Ministry of Defence announced that from 1 April 2014 the ship's homeport would change from HMNB Portsmouth to HMNB Devonport, the location of the Hydrography and Meteorology Centre of Specialisation and where the Royal Navy's other survey ships are based.

She was commissioned into the Navy on 23 June 2011 as HMS Protector. The commissioning ceremony was held on the 50th anniversary of the date that the Antarctic Treaty came into force. During September 2011, Protector embarked on operational sea training in preparation for her first deployment in November.

In February 2012, after receiving a distress call from Comandante Ferraz Antarctic Station on King George Island in the South Shetland Islands, Protector sailed to provide assistance to the Brazilian research station after a large fire had broken out there. 23 of her sailors were put ashore with fire-fighting equipment to tackle the large blaze. Two of the researchers died in the incident.

During March and April 2012, the ship operated in the vicinity of Rothera Research Station. During a major visit, she delivered around 170 cubic metres of aviation fuel. At 67° 34′ S, this was the most southerly visit of her career up to that date, nearly 800 miles (1,300 km) from Cape Horn, the southernmost tip of the South America. The crew competed in a 'winter Olympics' with scientists from the British Antarctic Survey.

On the way to her second Antarctic deployment, in October 2012 Protector surveyed the wreck of the Dale-class oiler RFA Darkdale in James Bay, Saint Helena, as part of an assessment of its possible threat to the island's environment. On arriving in Antarctica in December, her designated Antarctic Treaty Observers supported an international team carrying out inspections of research stations to ensure compliance with the Antarctic Treaty.

The ship left for her third Antarctic deployment in October 2013. She revisited Rothera and then sailed across Marguerite Bay, reaching a latitude of 68° 12′ S, 850 miles (1,370 km) from Cape Horn.

In the northern summer of 2014, the ship visited the Caribbean to perform training for humanitarian assistance, and also assisted some community projects in the British Virgin Islands.

Protector operates several small boats, including the survey motor boat James Caird IV, the ramped work boat Terra Nova and two Pacific 22 RIBs Nimrod and Aurora. She also embarks three BV206 all-terrain vehicles and a number of quad-bikes and trailers for activities on Antarctica, such as moving stores and equipment.

James Caird IV is a 10.5m, ice-capable survey motor boat built by Mustang Marine in Pembroke Dockyard, based on a design of existing British Antarctic Survey boats. It has a crew of five, plus up to five passengers. The boat was named by Alexandra Shackleton, the granddaughter of Antarctic explorer Ernest Shackleton, during the commissioning ceremony for Protector on 23 June 2011.

A day in the life of HMS Protector (Royal Navy)

For those unaware of the withdrawal of HMS Endurance (A171), the ship HMS Protector has replaced.

"In December 2008, while on an 18-month deployment, Endurance suffered extensive flooding to her machinery spaces and lower accommodation decks resulting in the near loss of the ship. A serious engine room flood left her without power or propulsion, and she was towed to Punta Arenas by a Chilean tug. After an extensive survey was completed, the estimates to refit the ship were put at around £30m. On 8 April 2009 Endurance arrived off Portsmouth, on the semi-submersible transporter ship MV Target.

The Royal Navy inquiry found that the flood happened while a sea-water strainer was being cleaned, in an attempt to improve the production of fresh water. The air lines controlling a hull valve were incorrectly reconnected, resulting in the valve opening and an inability to close it. The pipe installation fell below generally accepted standards, which made reconnection of the air lines ambiguous. The inquiry also found that due to manpower constraints the ship did not have a system maintainer, and that clarity of engineering command had been lost, with no-one clearly in charge of risk-management. It was fortunate that, once without propulsion, Endurance drifted over an area shallow enough for anchors to be lowered and to hold. Otherwise, Endurance would probably have been lost by flooding or running aground. The inquiry judged that the ship’s company responded well to control damage in challenging conditions."

Here is some information regarding the fate of HMS Endurance :
https://www.gov.uk/government/uploads/s ... urance.pdf
Top

HMS Protector sails south in the footstep of Antarctic heroes

Ice ship HMS Protector is heading for waters no Royal Navy vessel has visited in 80 years as she begins a marathon deployment to Antarctica.

The Plymouth-based icebreaker and survey vessel will ensure the world’s fishermen are not stripping the largely-unspoiled waters of the Ross Sea of marine life.

This part of Antarctica – it’s where Norwegian explorer Roald Amundsen began his successful attempt to become the first person to reach the South Pole – has not seen a Royal Navy or UK Government vessel for around eight decades.

The sea contains valuable fish stocks and Protector will help to ensure fishing vessels comply with the strict environmental rules that ensure this remains a sustainable resource.

The Ross Sea lies around 2,000 miles from the ship’s normal survey area off the Antarctic Peninsula and the change of location for her work this winter means Protector is heading east, not south, visiting the Seychelles and Australia before heading down into the ice.

HMS Protector is currently berthed at Gibraltar on her maiden visit.
Top

arfah wrote:A 3D printed drone with 30 minutes of flying time saves £7000 by not using a helicopter.

If true that is a significant saving, the irony would be amazing if they went to recover the drone with a helo!

Glad to see the RN continuing to put resources into schemes like this, innovating to save money and redeploy assets is something we need to see more of.

HMS protector is also on quite a significant deployment, a very long way from home. First time a RN vessel has been officially that far away since the 1930's apparently.
@LandSharkUK
Top

HMS Protector in the Antarctic and New Zealand

The Royal Navy’s ice patrol ship HMS Protector has launched tiny pilotless aircraft from her decks for the first time to assist with navigating through the Antarctic.

A quadcopter and a 3D-printed aircraft have scouted the way for the survey ship so she can find her way through the thick ice of frozen seas.

It’s the first time the Royal Navy has used unmanned aerial vehicles in this part of the world.

Videos of her travels, and her UAV's

To ask the Secretary of State for Defence, what missions HMS Protector is currently undertaking; and how many missions that ship has undertaken in the last five years.

HMS PROTECTOR, the Royal Navy's Ice Patrol Ship, provides a United Kingdom Sovereign presence in the British Antarctic Territory, South Georgia and the South Sandwich Islands and their surrounding maritime areas.
PROTECTOR is currently in the South Atlantic and is focussed on the provision of support to the Foreign and Commonwealth Office, including Antarctic Treaty inspections and station visits in support of the British Antarctic Survey, and survey activity, primarily to increase charting coverage of Antarctic shipping routes and the United Kingdom Overseas Territories. She recently successfully deployed unmanned aerial vehicles for the first time to assist with navigating through the Antarctic.
Since entering service in 2011, PROTECTOR has been deployed to the South Atlantic from December 2011 to May 2013; and from October 2013 to April 2015. In October 2015, she again deployed from the United Kingdom, arriving in the region this spring, having conducted a circumnavigation of the globe. Having spent last Antarctic summer celebrating the deeds of one British polar hero, the crew of Royal Navy icebreaker HMS Protector have opened the 2016-17 survey season honouring his rival.

A century after Sir Ernest Shackleton landed at King Haakon Bay on South Georgia in a makeshift lifeboat – the James Caird – Protector entered the same fjord and sent her hi-tech survey launch – the James Caird IV – close to the identical spot.

In May 1916, Shackleton’s landing was followed by a 36-hour trek over the island’s mountains to the whaling station at Stromness, where he finally alerted the world to the plight of his expedition; every man in his expedition party trapped on Elephant Island, 800 miles away, was eventually rescued.

One hundred years later and Protector’s Royal Marines detachment led some of the ship’s company on the final six kilometres of Shackleton’s 32km walk from Fortuna Bay into a now-abandoned Stromness.

“It was a privilege to be able to follow in the footsteps of Sir Ernest Shackleton – if only for a short distance,” said Marine Tom Colwill.

“The weather going over the ridge was amazing and we had fantastic views. Once we reached Stromness the fog closed in and we had a short taste of the conditions the original expedition may have experienced.”

Weapon engineer LET(WE) Andy Conway added: “This was an amazing day, probably one of the best of my career so far.”

With whaling long gone, South Georgia has been re-born as a remote nature haven and an increasingly-popular destination for eco-tourists; during the summer season (April-September) upwards of 10,000 people now visit the island.

As a result, the charts cruise liners use to negotiate its rocky waters need to be bang up to date, so Protector and her hi-tech survey launches such as James Caird IV gathered the latest data on the seabed.

During her stint around South Georgia the Plymouth-based icebreaker/survey ship scanned 160 square miles of seabed – roughly the area of the Isle of the Wight. The reams of data collected will be fed by the UK Hydrographic Office in Taunton to allow it to update the charts used by the Royal Navy – and many of the world’s mariners.

During the 2015-16 season, she concentrated her efforts in the Ross Sea – last visited by a Royal Navy vessels eight decades ago and the focal point for Capt Scott’s attempts to reach the South Pole.

In visiting Capt Scott’s former haunts, Protector has also visited many of his arch rival’s; in the 12 months since the ship left the UK, she has visited almost all of the key locations associated with Shackleton’s polar expeditions: Lyttelton in New Zealand, his hut on the Ross Ice Shelf, the abandoned whaling stations of South Georgia and the Antarctic gateway port of Punta Arenas, Chile where Shackleton and his men were ultimately rescued with assistance from the Chilean Navy.

Interesting one from HMS Protector on Twitter, no doubt a subtle jibe in reference to the loss of an embarked helicopter capability compared to her predecessors. 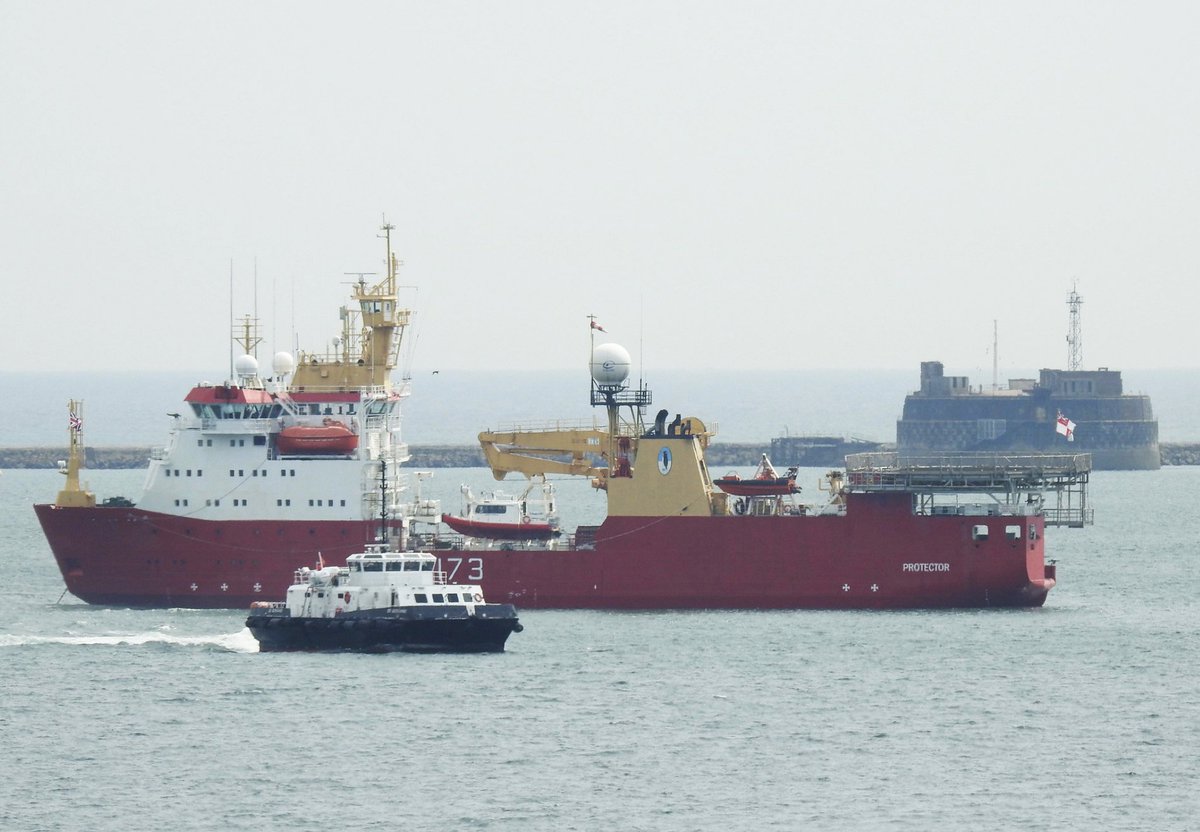 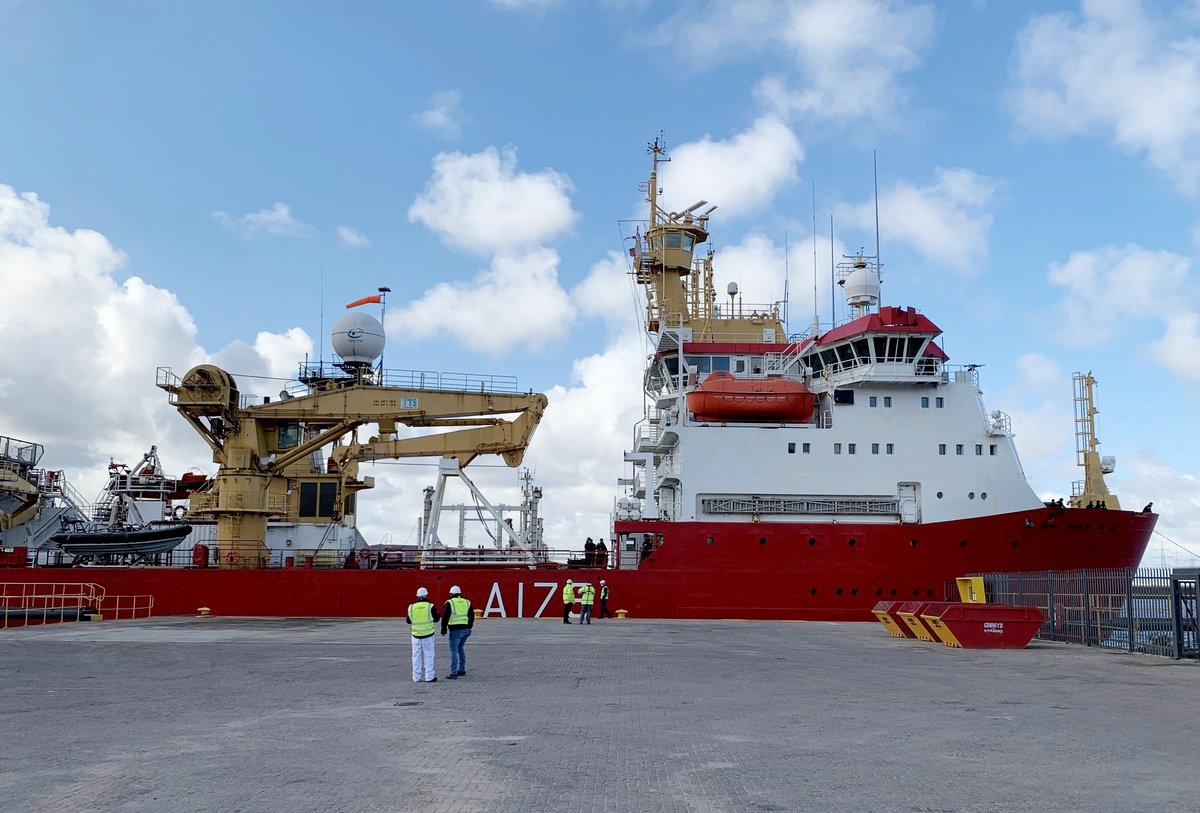 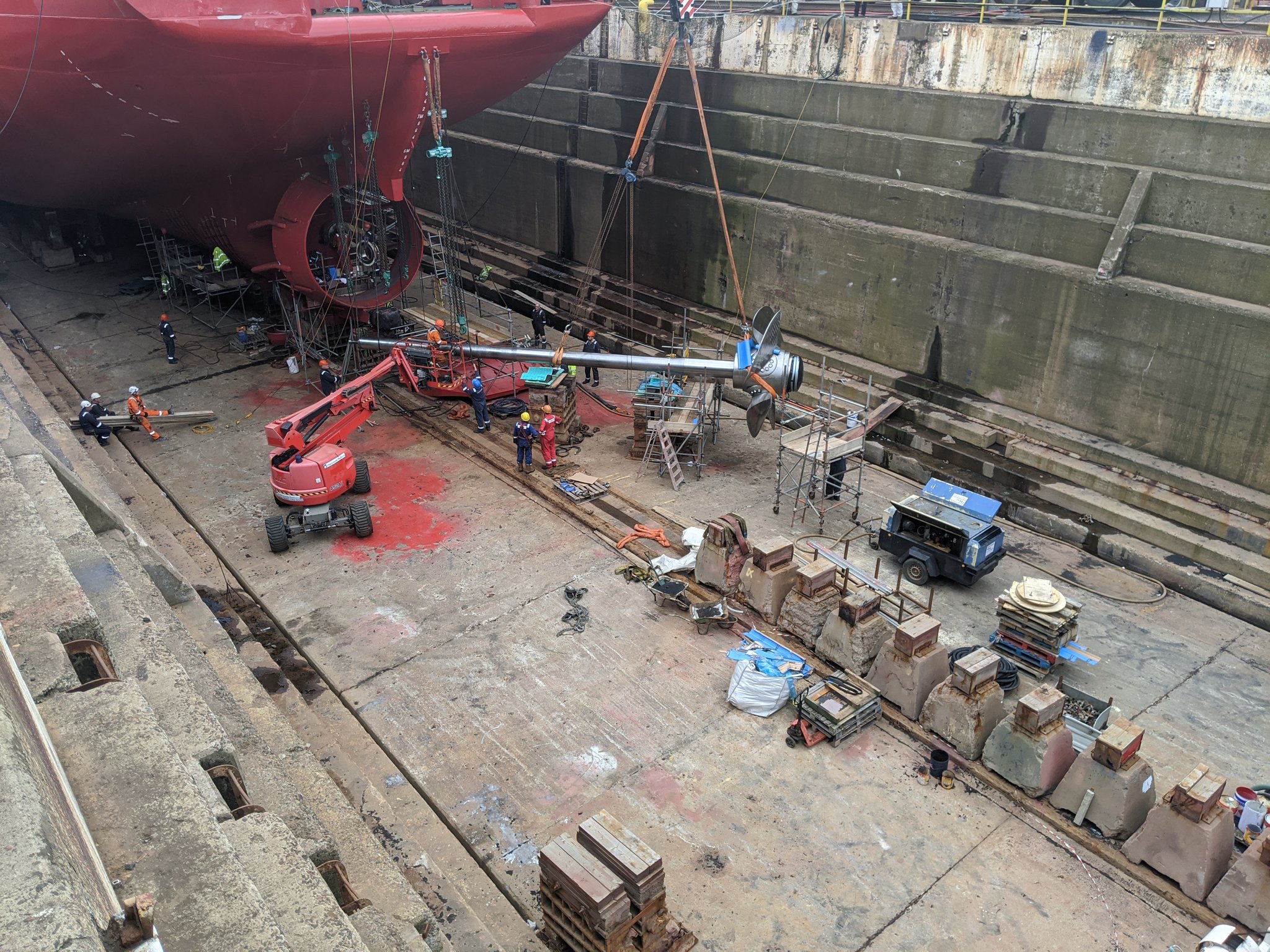 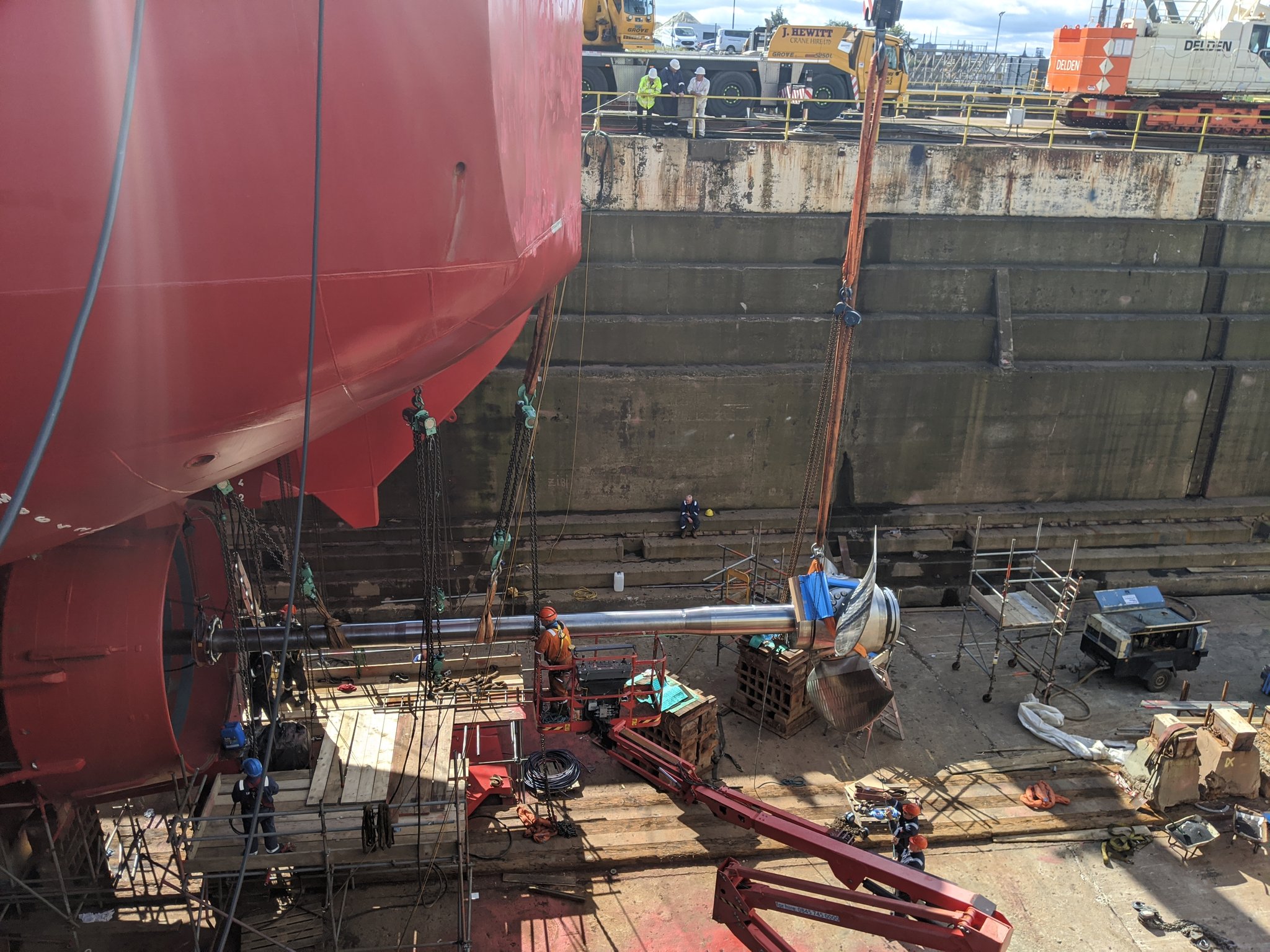 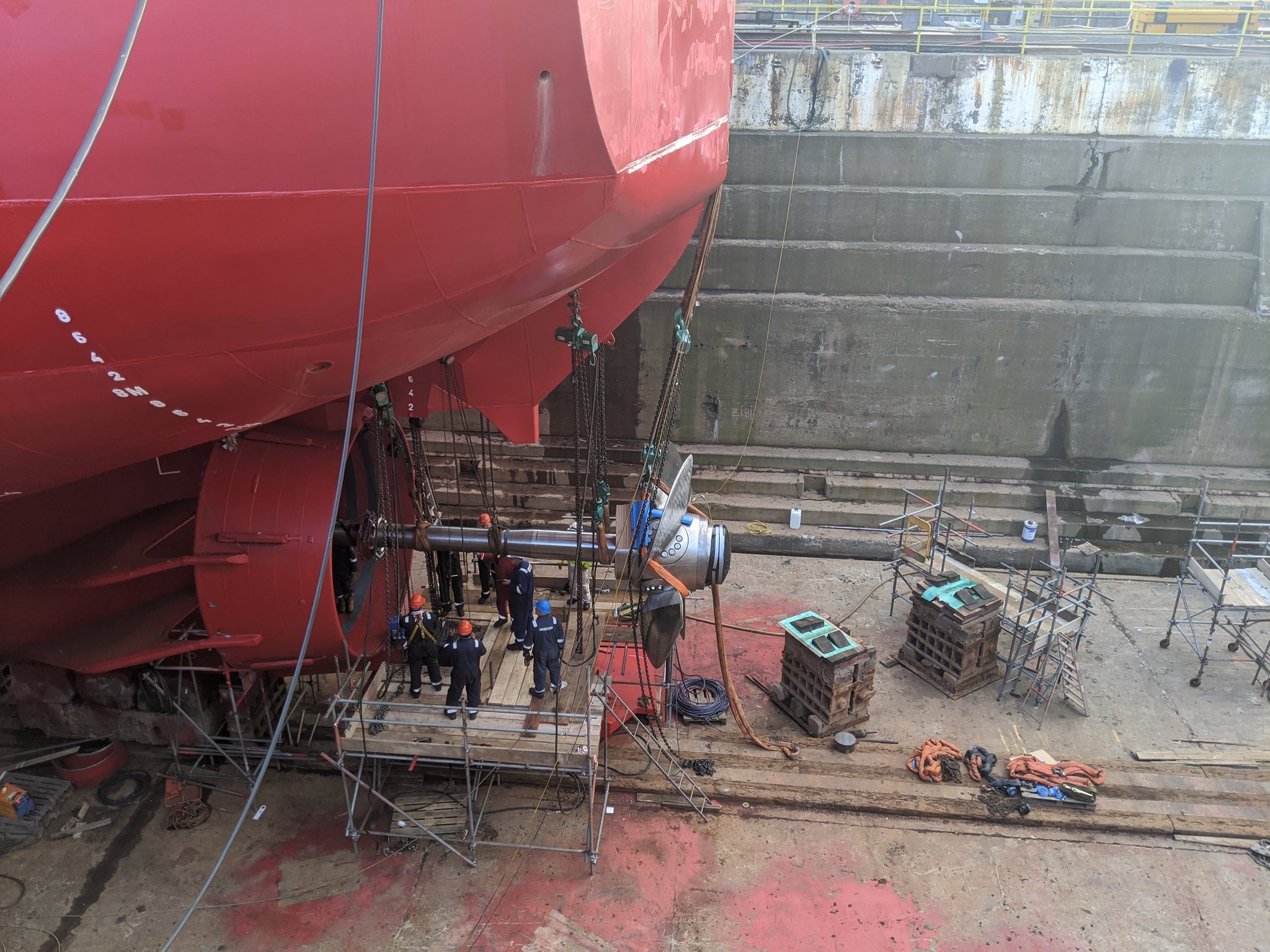 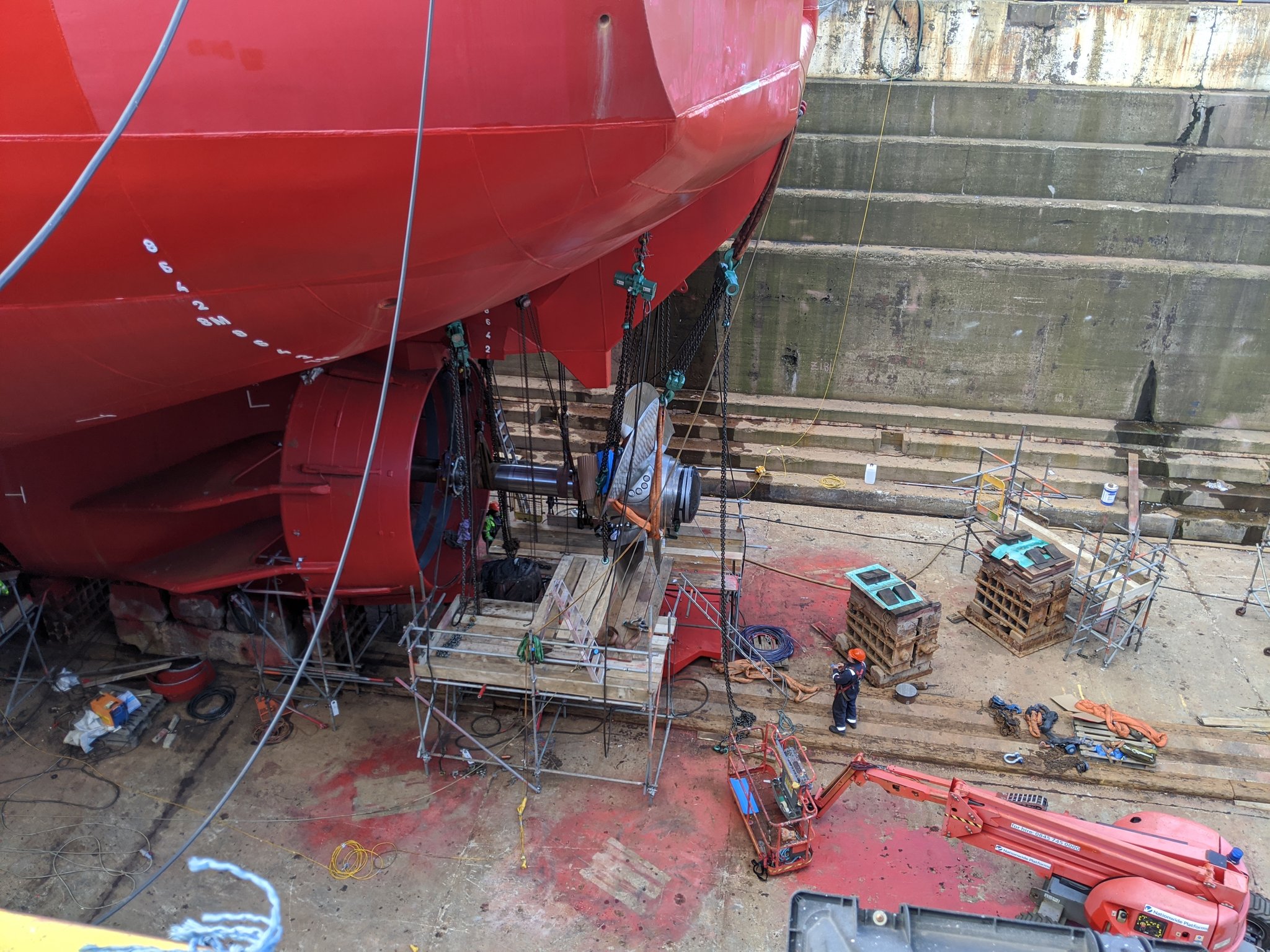 A major milestone for HMS Protector as our propeller and shaft are carefully reattached.