Contains threads on Royal Navy equipment of the past, present and future.
Post Reply
43 posts 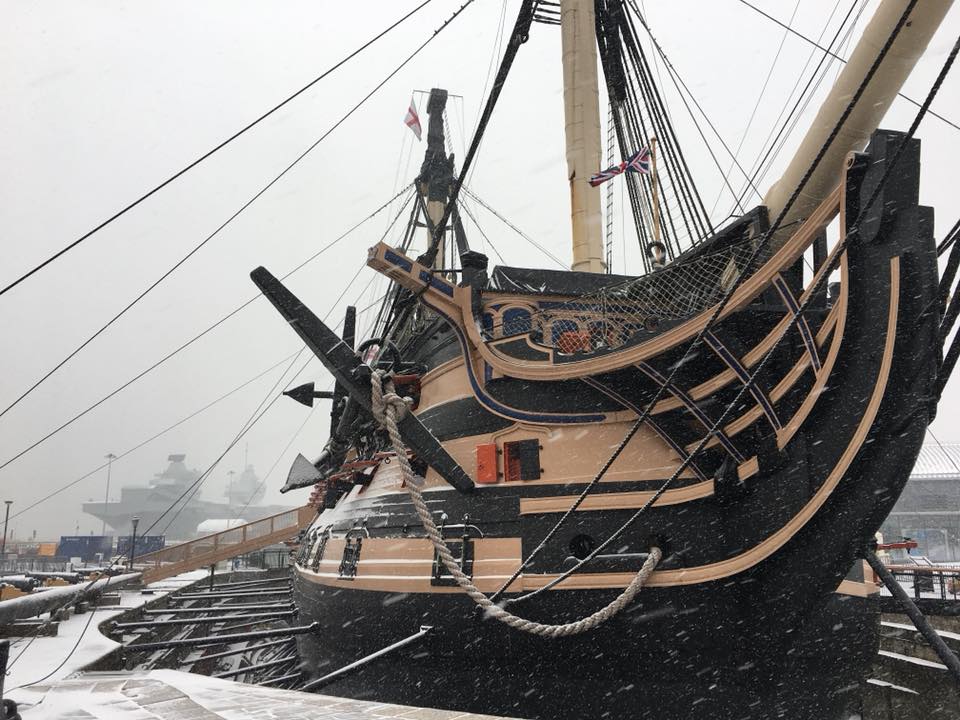 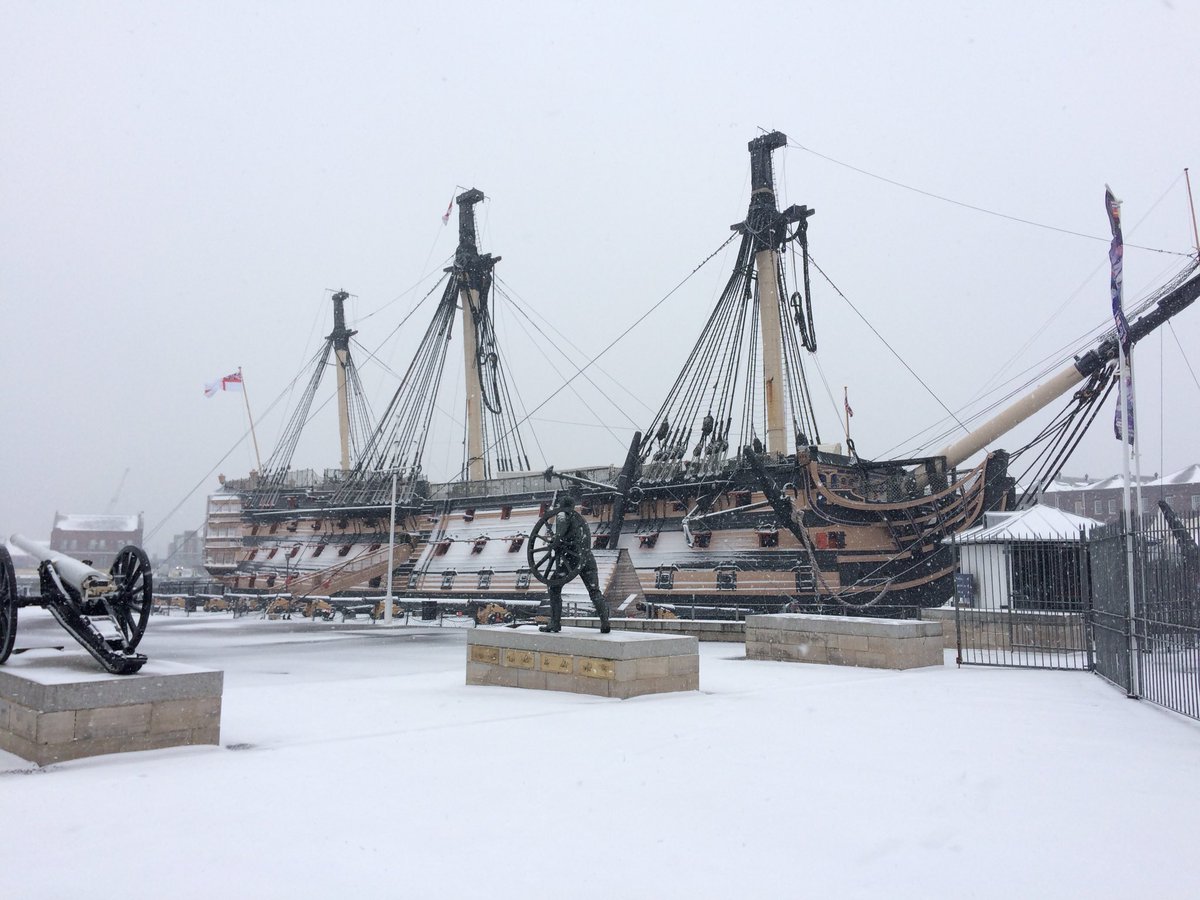 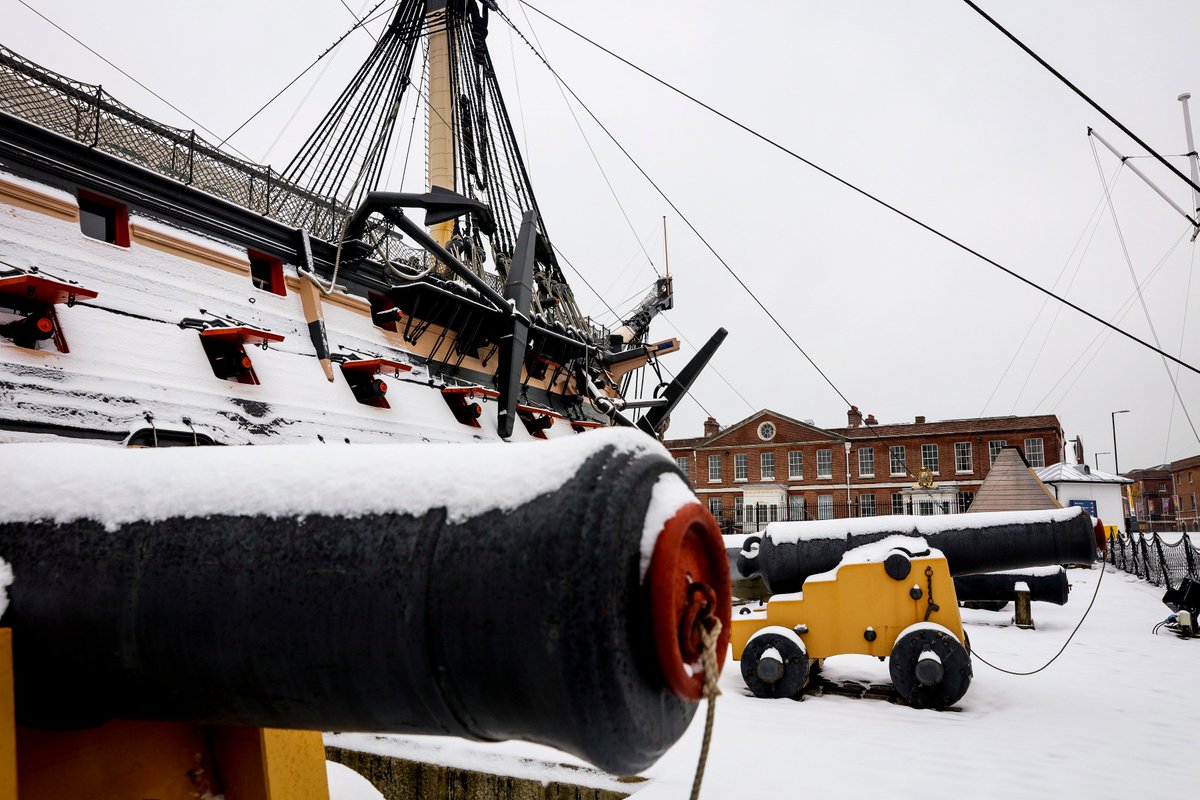 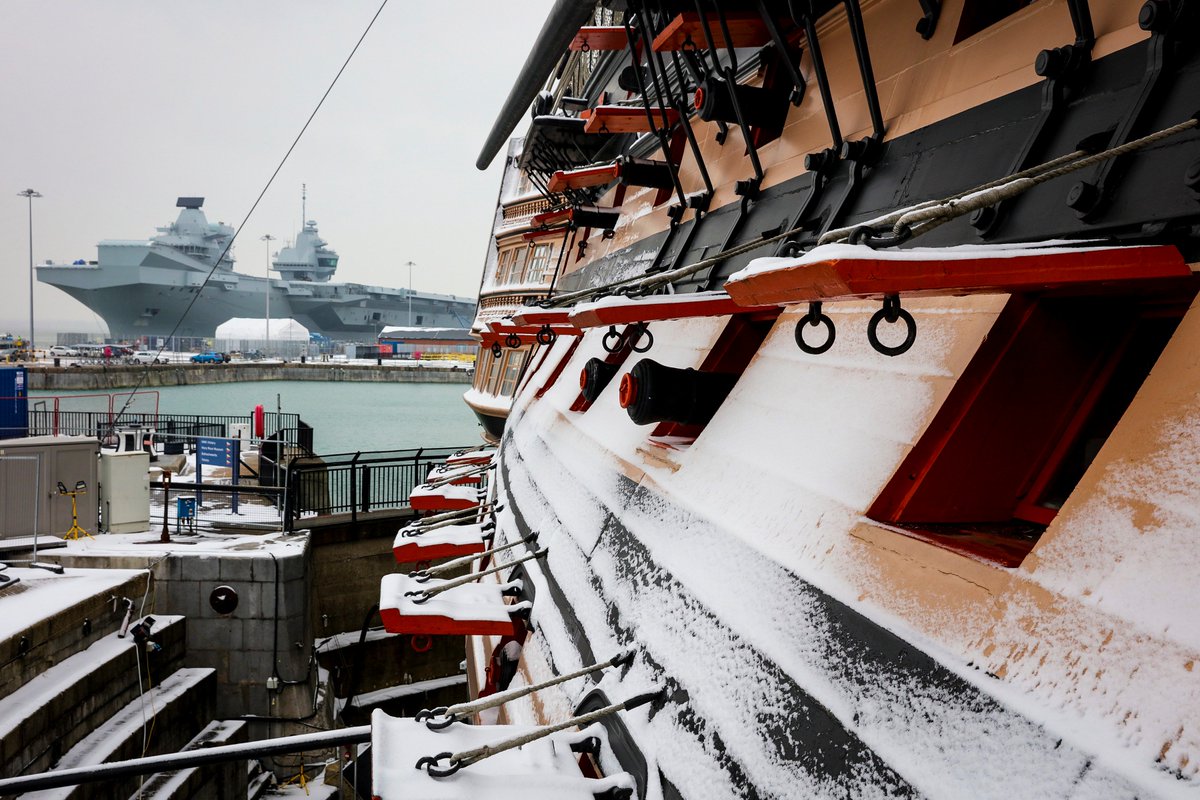 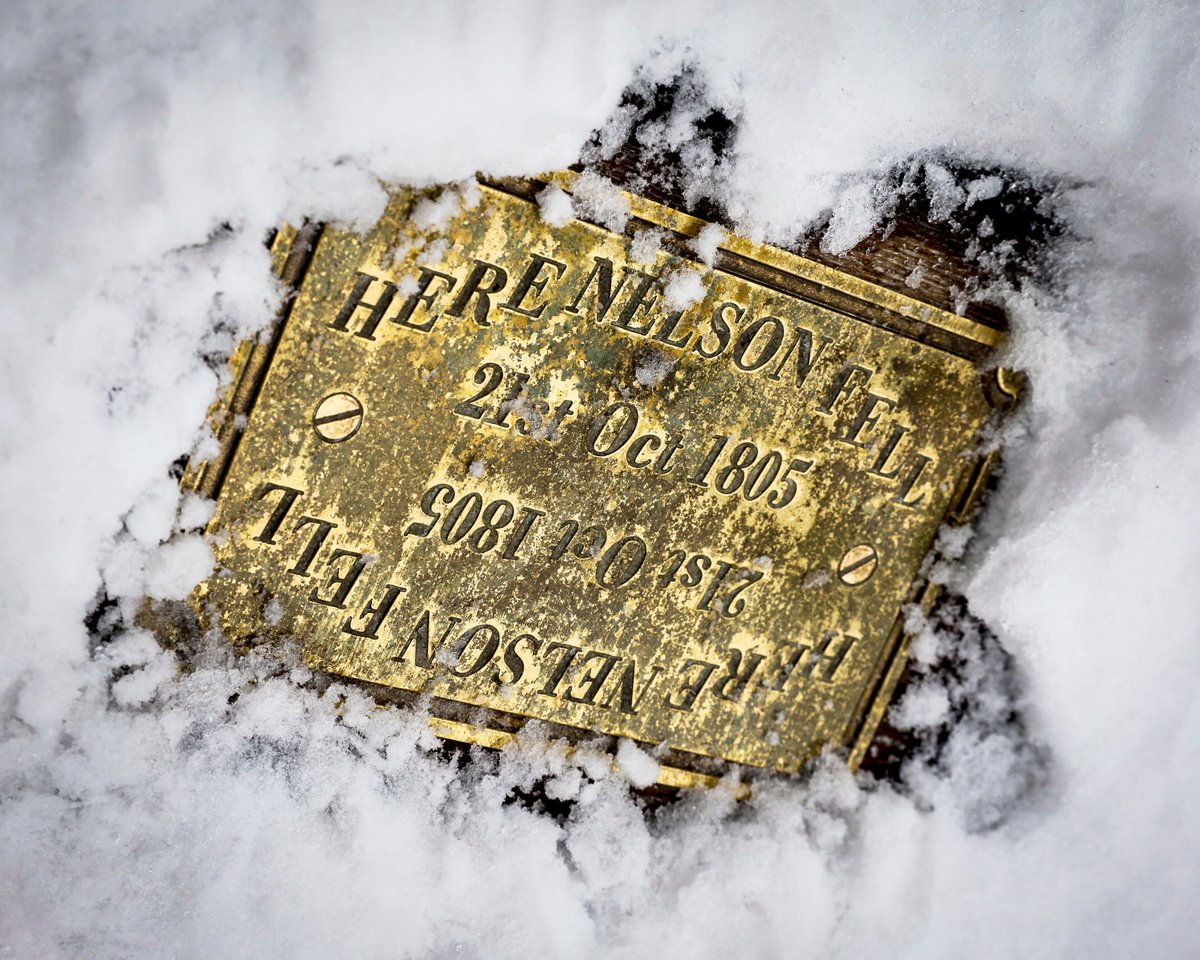 While I was brave enough to venture South, having had my injections! I visited Victory, and she is truly Magnificent. Last time I saw her was 2010, And since then almost the whole ship inc the hold is superbly presented, and relatively accessible. My only gripe.
How do you take some of the shine of a Ship of Truly Global importance?
Answer:
Build a gift shop inside her!
I know, a gift shop. Inside her, complete with laminate flooring!
Is nothing sacred?
Rip it out now please, because this ship does not deserve to be so de filled.
On a serious note, she is Truly Spectacular, and a credit to all those who have so lovingly restored her.
We're told her lower gun deck is the only original part of the ship left from the Battle of Trafalgar. It looks ancient, warped, knarled, repaired, bowed and a has a patina that is amazing. How long before access to walk on this deck will be declined?
Top

Yes, the little giftshop INSIDE Victory is strange, but thankfully its the last thing you see on the way out of the ship - out of a hole CUT in the lower hull of the ship! I'd like to see the shop removed and relocated somewhere else without it interfering with the sightlines of the Victory herself.

Did you go on HMS Warrior too? There's a small, but functioning café operating from her galley!
Top

I did, we spent all day Tuesday at the Historic dockyard, and I even went to see HMS Alliance! Spectacular!
I saw the cafe on Warrior, and did my best to ignore it although you can't avoid it, but the gift shop on Victory really made my blood boil!
I even found HMS Hood's bell, although not sure why it's in the Jutland exhibition, and next to the exit! As a result I neary missed it.
Top

This sail used to be displayed inside a glass case deep down in the gloom of HMS Victory's orlop deck.
Top 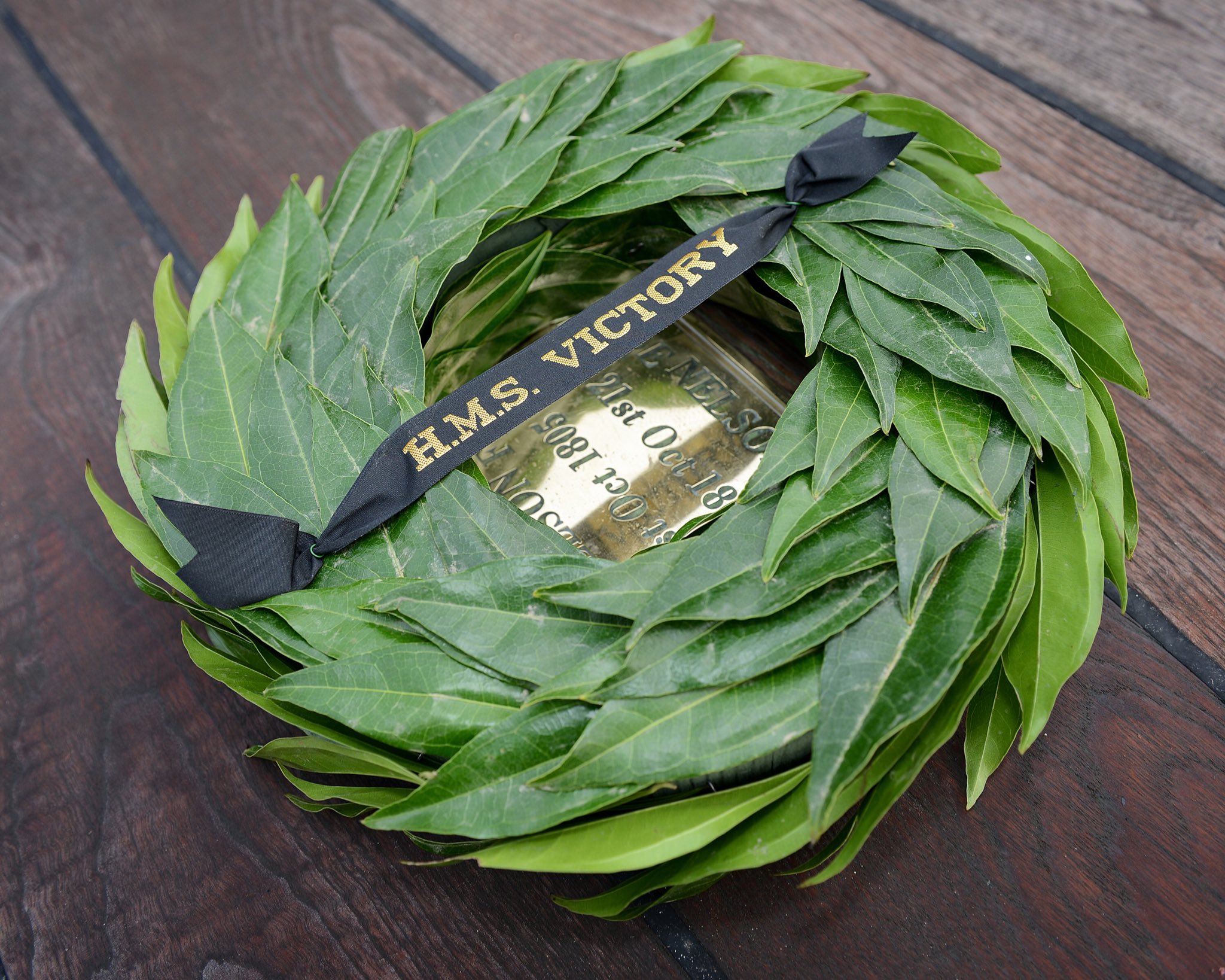 Today marks the 213th anniversary of the Battle of Trafalgar. On this day in 1805 Horatio Nelson, aboard HMS Victory, led 27 British ships to victory over 33 French and Spanish ships, losing his life in the process.
Top

A magnificent narrated guided tour of HMS Victory and her history, by YouTuber Drachinifel.
58 minutes long, but very entertaining with some good humour thrown in.

You can see the world’s most famous warship as not even Nelson saw her when HMS Victory re-opens to the public this month.

Three years of groundbreaking work by engineers, scientists and historians means visitors can see the flagship at Britain’s greatest naval triumph from below for the first time, after replacing the original cradles the man o’war has rested on for nearly 100 years.

In their place, 134 stainless steel props not only support the 260-year-old warship securely, but provide experts with constant data on the state of the ship – and allow tourists to inspect the 69-metre-long Trafalgar veteran from bow to rudder from below… a privilege not even Admiral Nelson himself is thought to have enjoyed.

Victory has been preserved in No.2 dry dock (itself 218 years old) since the 1920s; engineers used a series of steel cradles to support the 3,500 tonne vessel.

A century later and as part of an unprecedented 20-year £40m overhaul of the ship, the steel cradles (and tonnes of supporting concrete) have been gradually replaced by the hi-tech props, which can be adjusted to mimic the pressure of the ocean around Victory’s hull just as when she once roamed the seas.

Andrew Baines, project director for the National Museum of the Royal Navy, said replacing the original supports was crucial to the long-term future and preservation of the iconic ship.

“Victory was slowly collapsing on herself. We had to fix the foundations and now we have, we can carry out the rest of the ‘keyhole surgery’ which she needs to keep her going for the next 250 years,” he said.

The bonus of saving the ship using the special props has flooded the dock bottom with light and allowed access like never before; a walkway has been created for visitors to get underneath Victory.

“It’s an amazing, breath-taking space to be in,” said Matthew Sheldon, the museum’s head curator. “I’ve been here 26 years and I’ve never seen Victory like this before. The views of her bow and rudder are fabulous. You can get up close to the ship like never before.”

The cutting-edge technology will feed minute-by-minute data on the strains, stresses and loads the ship is bearing, then the props – mostly 6in in diameter – can be adjusted accordingly.

“It’s been a unique endeavour for a unique ship,” said Rob Hanway, Victory Programme Manager from BAE Systems which led the complex project.

“There’s never been anything quite like this before – a combination of the old and the new. Props have been used on cranes, but never on such a scale.

“Over the past 18 months as we’ve taken out the old cradle, the sheer daylight flooding into the dock meant you noticed the difference and she looks pretty impressive. It’s been an absolute pleasure to work on her.”

The public can view Victory – and the rest of the sights in Portsmouth Historic Dockyard – when it re-opens on August 24. Numbers to the site will be limited to 250 per hour initially, and all visitors must book online in advance via: http://www.historicdockyard.co.uk/tickets-and-offers

Visitors will be able to see Lord Nelson's famous flagship from below for the first time when Portsmouth Historic Dockyard reopens later this month. HMS Victory, best-known for her part in the Battle of Trafalgar in 1805, underwent the work as part of a £35m conservation project. It includes new supports to stop the 3,600-tonne ship from collapsing under her own weight. 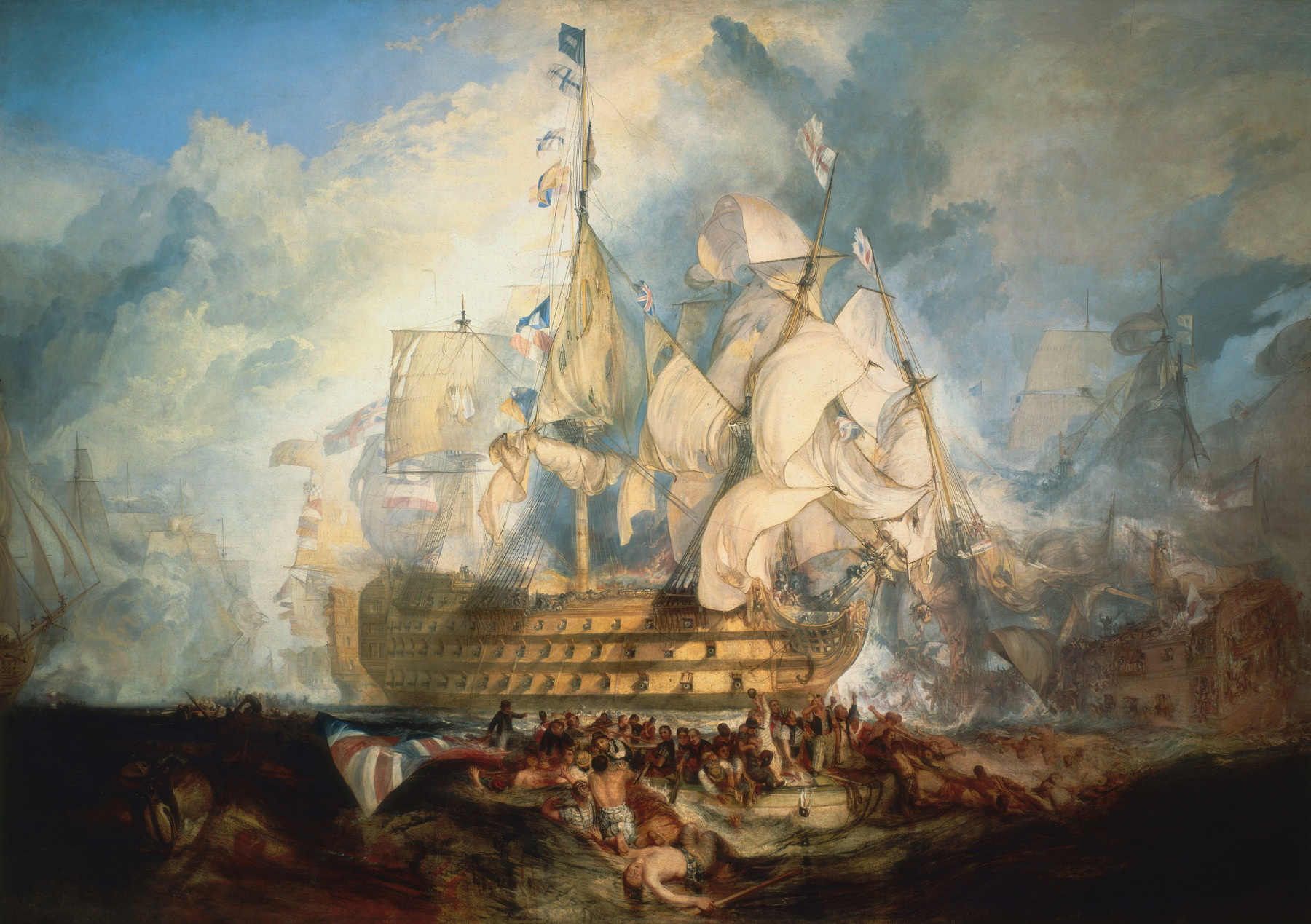 The famous 1822 painting "The Battle of Trafalgar" by J. M. W. Turner, combines events from several times during the battle. Nelson's famous signal "England expects..." flies from the Victory (11:50); the top-mizzenmast falls (13:00); the Achille is on fire in the background (late afternoon) and the Redoutable sinks in the foreground (following day). Turner shows the Victory flying her signal flags from the main-mast, although in actuality they would have been flown from the mizzen-mast and were replaced with the signal for "engage the enemy more closely" once the battle commenced.

Today is the 215th anniversary of 1805's Battle of Trafalgar.

Found a 2011 timelapse video of HMS Victory (in her old mustard yellow paint scheme) having her mast tops and rigging taken down for restoration.
Nine years later in 2020, they're still not back, although she looks nice with the more accurate yellow-ochre paint.
Top

I don’t know about anyone else, but I am getting mightily fed up with looking at Victiory in her protracted emaciated state! Perhaps it is just another sign of the continuing under investment in the RN. Talk about fitted for, but not with!

I've found these very interesting Pathé film clips of HMS Victory. The first video is her being floated into No.2 Dock on 12th January 1922. The second and third are Victory being REFLOATED on 8th April 1925 within No.2 Dock.

HMS Victory had been floating in Portsmouth Harbour after Traflagar as was used as a ceremonial guard ship, a telegraph school and was in a very poor condition in the early 20th century. Her appearance looked quite different with 19th century modifications too. A campaign to save Victory had her placed into Portsmouth's No.2 Dock on 12th January 1922 in order to repair and restore her back to her Trafalgar-era appearance.

I had always assumed that Victory was never refloated again after this. But she was! So why?


"The ship was refloated for the last time on 8th April 1925 to adjust her cradle and so that her waterline was level with the top of the dock."

HMS Repulse in the background.

The 20 year-long project to secure HMS Victory in her dock at Portsmouth's Historic Dockyard has now been completed.
The installation of the new high-tech props has allowed The National Museum of the Royal Navy to install a walkway underneath the ship giving visitors a more intimate experience of this iconic ship.

This is Epic History TV's guide to HMS Victory, one of the most famous warships in history, and flagship of Vice Admiral Nelson at his decisive victory over the Franco-Spanish Combined Fleet at Trafalgar in 1805. We look at the crucial role played by Britain's Royal Navy in the Napoleonic Wars, before beginning a deck-by-deck exploration of HMS Victory, a first-rate ship-of-the-line, and the most powerful class of warship afloat. We'll help you to identify and understand the role of masts, yards and rigging, as well as deck layouts, the hold, and her powerful armaments.

Thank you to the National Museum of the Royal Navy for their help in making this series. HMS Victory is currently undergoing a major conservation project, but remains open to the public throughout.

This is Epic History TV's guide to HMS Victory, one of the most famous warships in history, and flagship of Vice Admiral Nelson at his decisive victory over the Franco-Spanish Combined Fleet at Trafalgar in 1805. In this episode we look at the composition of naval crews, and how they sailed, fought and lived aboard a warship like Victory.

Thank you to the National Museum of the Royal Navy for their help in making this series. HMS Victory is currently undergoing a major conservation project, but remains open to the public throughout.