Contains threads on British Army equipment of the past, present and future.
Post Reply
10 posts • Page 1 of 1

Speaking to Janes , Dstl and British Army officials described their latest concepts regarding the BGOAA, which is expected to enter service throughout the 2030s.

According to Lieutenant Colonel Mike Baxter, SO1 Light and Medium Forces, British Army, BGOAA will seek to identify potential replacements for a variety of legacy anti-tank solutions, including Swingfire, Javelin, Next generation Light Anti-tank Weapon (NLAW), and Anti-Structure Munition (ASM).

“These systems were designed in the 90s and 00s, with early 2000s conflict in mind, typically as dismounted systems and not optimised for on-the-move operations. During the lifetime of these systems, they have not really faced a significant armour threat,” Lt Col Baxter said. 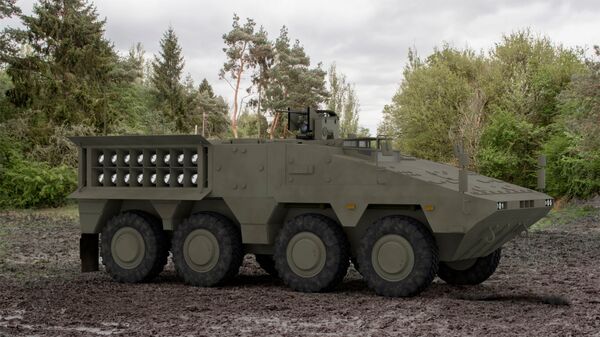 “BGOAA takes the experience of the last few years with the aim of providing accurate, long-range engagement capabilities down to the section level against armoured and non-armoured targets,” he said.

Challenges being considered by Dstl and the army as part of the BGOAA solution include the proliferation of vehicles’ integrated active protection systems and multispectral imaging sensors, which can leave anti-armour platforms with “nowhere to hide”.

According to Dstl’s Close Combat Guided Weapons Science and Technology lead, Mark Pickering, BGOAA is now in an early acquisition and pre-concept phase. Its capabilities will be staggered into service throughout the 2030s, Pickering said, adding that MCCO will represent the army’s first priority in the wider BGOAA programme.

“We have the wrong equipment for the next generation of conflict, especially when you consider the proliferation of cyber technology and similar. So we must adopt a high level of agility to counter [the] advanced technologies we might face,” Pickering told Janes . “We want to be in a situation where we can engage the enemy with a single shot. Today, we are not in a good position for attritional warfare and we need to add lethality so we can achieve that overmatch. So we are looking at a complete suite of anti-tank capability in the 2030s and beyond.”

Demanding a maximum effective range of greater than 10 km for the MCCO, the army is considering 50 kg-class effectors to provide a long-range, anti-armour capability. Such a solution must be capable of being cued by third party assets such as unmanned aerial systems (UASs) and attack helicopters.

The CCAAW programmes are looking to identify a successor for Javelin, with the aim of at least doubling its range and including beyond line-of-sight (BLOS) engagements. Technology areas of interest cover conventional and non-conventional guidance solutions, Dstl officials noted.

Finally, the CISD programme will replace NLAW and ASM effectors with a requirement to “significantly” extend the range for anti-armour and multi-effect fire missions. The British Army envisages fielding either a single or two different systems to satisfy this.

The laboratory said it is being supported by UK-based companies including BAE Systems, Leonardo, Lockheed Martin, MBDA, Saab, Thales, QinetiQ, and Ultra Electronics. This includes supporting the Weapons Sector Research Framework (WSRF) for which Lockheed Martin, MBDA, and Thales have offered conceptual mock-ups to support BGOAA.

Concepts include a Lockheed Martin VLS mounted on a 8×8 Boxer vehicle: the British Army’s platform for its Mechanised Infantry Vehicle (MIV). Lockheed Martin images illustrate a UAS or other aircraft cueing VLS-launched munitions onto a BLOS target.

Lockheed Martin has also produced an additional concept to support force protection requirements based on a shipping container with integrated VLS for fixed site or mounted applications. 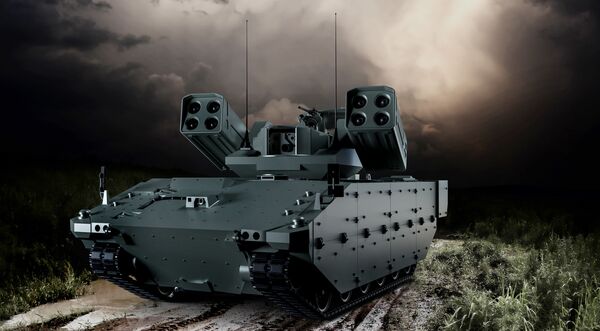 BGOAA will be enabled by an MoD-owned electronic architecture meant to facilitate interoperability with other strategic areas, including ground-based air defence.

The laboratory is expected to shortlist up to 10 concepts under the BGOAA umbrella, Pickering told Janes . ”As the equipment programme matures, then assessment phases and detailed assessments of the system in 2022 and beyond will follow, with trials designed to inform a commercial decision. Our aspiration is to demonstrate a remote turret between 2023 and 2025,” he added.

Comment
The British Army has outlined new concepts to satisfy emerging demand signals for operating against peer and near-peer armed forces. New technology will be able to support many of these demands but the army will likely still seek short- to mid-term upgrades of legacy anti-armour solutions ahead of BGOAA’s potential entry into service, which is still a decade away.
Top

Ooh we should get the first of these ideas fielded about 2050ish I think ,after the yes we want it no we don't have gone through the motions ,but I tell you now we will be promised lots but only get 3

Tempest414 wrote:on a more positive note if we were to go with Brimstone we could also use the same platform to use Spear EW on the battle field

Thanks very much @Defiance for posting the Jane's article

An exciting programme for a much, much needed set of capabilities.
Top

Well, ten years is a long time and the list of ten will be whittled down, I guess, to cover the whole spectrum.
Ever-lasting truths: Multi-year budgets/ planning by necessity have to address the painful questions; more often than not the Either-Or prevails over Both-And.
If everyone is thinking the same, then someone is not thinking (attributed to Patton)
Top

Whilst I applaud the Army for finally trying to develop a cohesive plan for its future organisation and equipment, we are still gong to have to pray nothing really happens for the next ten years as the Army will not be viable for anything but low intensity COIN style operation over that period. The MoD is leaving so many capability gaps, such as BGOAA, that will not be filled for a decade it is verging on negligent. I just hope the Top Brass have told the Government that Global Britain will not even start to truly form for at least ten years or two elections.
Top

Well one way to speed up the BGOAA programme would be to partner with Rafael and work to develop improved versions of its existing weapons systems whilst adopting its current offerings. This way the improved systems could be made to be compatible with many of the pieces of kit already purchased with the current weapons systems, whilst adding further options down the line.

This has to be cheaper than trying to develop a whole new family of guided weapons to meet a very advanced and challenging set of requirements that will not deliver anything to the troops for at least ten years and will probably be expensive and also be a case of reinventing the wheel as other systems will already be established in the market, so we will have another Brimstone solution, world class weapon that few countries will actually buy.
Top
Post Reply
10 posts • Page 1 of 1