Contains threads on Royal Navy equipment of the past, present and future.
Post Reply
62 posts

MikeKiloPapa wrote:also be quite interested to know exactly which areas you think needs redesign .

If the flex decks floods uncontrollably then the vessel sinks. RN will not accept a Frigate that sinks if one single compartment floods.

Additional compartmentalisation of the flex deck would solve the problem but that would require a major redesign.

MikeKiloPapa wrote:But lets say you are right that Absalon doesnt live up to the high RN standard....then where does that put the T26 with its large combined helo hangar/ mission space,?

If a T26 is so low in the water that the amidships mission space and hanger is flooding then the vessel is already lost. The flex deck is much closer to the waterline.

How many compartments would need to flood to ensure that a T26 was so low in the water? Many more than one.
Top


it has an extra deck.


No that is a quite common misconception, but both ships are in fact 7 deck designs. The flexdeck on Absalon is just 2 decks high.

You can see the extra deck in photos.

I agree thats what it looks like but its an illusion, caused by the lower "hip line" on the Absalon, the raised flight deck( as you yourself notes) and the fact that the decks on IH are a little bit taller.

but retaining the extra engine room of IH.

IH doesnt have an extra engine room.....both have a forward and an aft engine room in pretty much the same place and size.....On Absalon each contains just one MTU 20V8000 M71 main engine, a gearbox and 2 CAT DGs, while IHs engine rooms have 2 MTU ME and a gearbox each. There the DGs are placed 2 and 2 in their own rooms on the side of the (longitudinally off-set) main engine rooms

I don't want to argue as you are far better informed than I, but Absalon having a deck which is two decks high is surely the equivalent of an extra deck? Are the decks above the flexdeck not higher up?

How hard can the 2x table be? IH has two engine rooms with two engines in each.

How hard can the 2x table be? IH has two engine rooms with two engines in each.

Yes but the DGs are located in two additional rooms when compared to Absalon.
Top

The Absolon design has 16 watertight compartments - I suspect that the designers will have looked at the problem of the flex deck flooding and taken steps to counter it. After all, Bulwark and Albion have a far larger "flex deck" and dock area and they are rated as a combat ship (and expected to go into situations where it might take serious damage, with consequent danger of flooding). The design is DNV naval standard ratified, with heavy utilisation of STANAG standards.

The flex deck, is formed by increasing the height of the deck below the flight deck for about 60% of the length of the vessel, resulting in the flight deck, hangar and the rest of the superstructure, to a point just forward of the forward funnel, being raised when compared to the IH design.
The pessimist sees difficulty in every opportunity. The optimist sees the opportunity in every difficulty.
Winston Churchill
Top 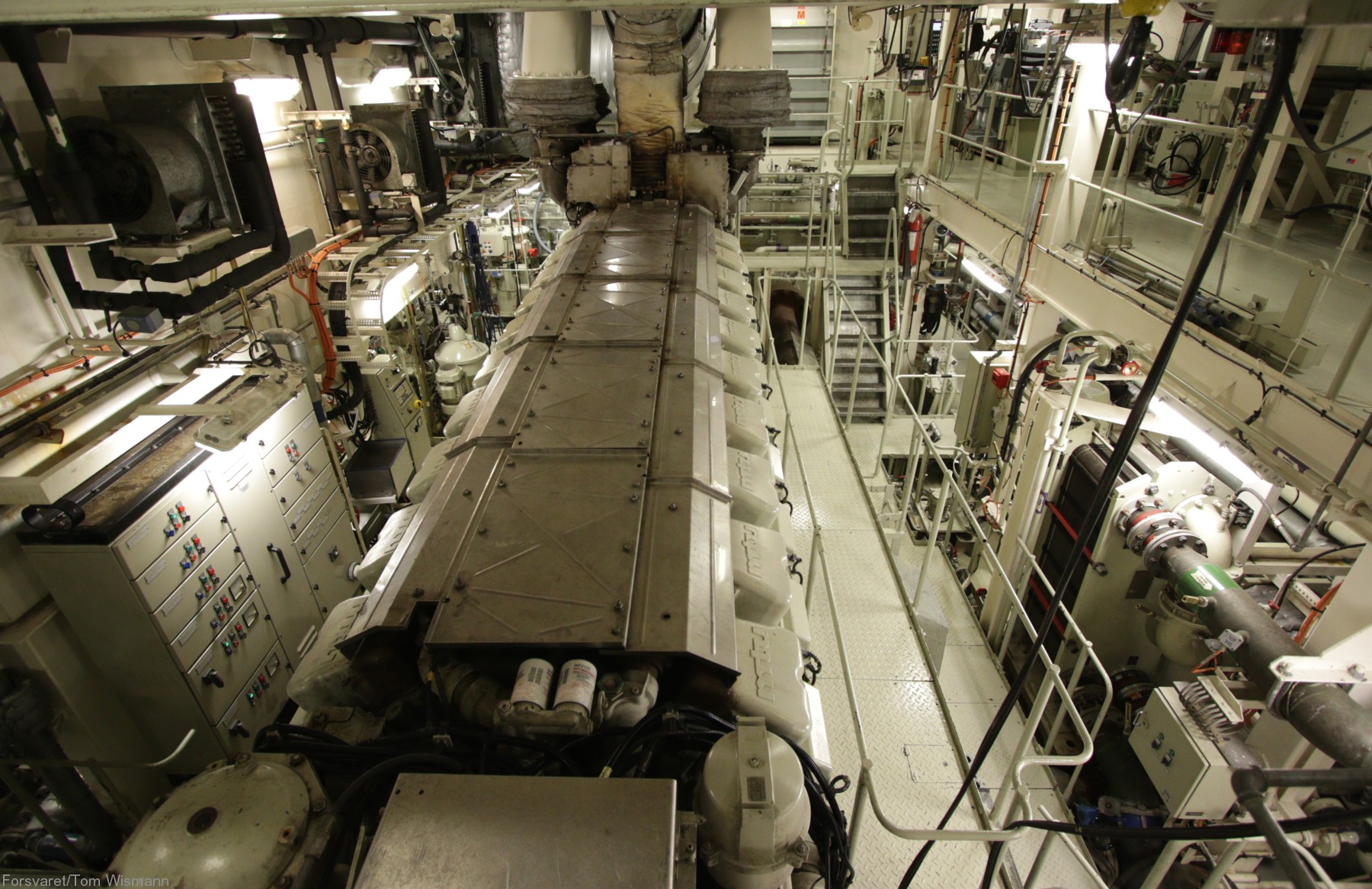 It shows how intensive the re-design work will be, if we want the "29 knot top speed (of T31)" and "another deck of Absalon". If you ALSO want the "two Merlin capable hangar", the situation gets more complicated. Majority of the 2nd-Merlin hangar space was used for increased diesel-gen intake and exhaust in IH-class.

Many comments come up to my mind, but not now... Just share these three websites for a moment.

For example, I can see the engine room of IH-class LOOKS LILE a bit taller than that of Absalon class. It will be just difference in arrangement, but as the deck height is taller in IH-class, it is natural.

donald_of_tokyo wrote: For example, I can see the engine room of IH-class LOOKS LILE a bit taller than that of Absalon class. It will be just difference in arrangement, but as the deck height is taller in IH-class, it is natural.

Watch from 7:00 for design thinking which includes both a built in crane and monorail in the engine room.

Caribbean wrote:I suspect that the designers will have looked at the problem of the flex deck flooding and taken steps to counter it.

Im sure you are correct but if RN accept such a Frigate design much of the time and effort put into the reconfigurable T26 mission space will have been wasted. A simple Ro-Ro deck with side hatches would have been much easier allowing the stern mounted tail to operate unimpeded and allow for extra Mk41 VLS cells amidships. RN chose not to go down this route probably due to damage control concerns, why volte-face now?

donald_of_tokyo wrote:...It shows how intensive the re-design work will be

IMO a redesign to procure a Absalon/A140 Hybrid would effectively cost a Frigate in monetary terms.

Building the T31's as fully kitted out Frigates and procuring additional multipurpose vessels for MCM, HADR, anti narcotics/piracy (to be built at Rosyth) is still a preferable option IMO.

Something along these lines.
https://vardmarine.com/gallery/vard-7-313/

Tempest414 wrote:freeing up the whole weapons deck space for said mission bay no need to worry about engines or a Flex deck

I am not sure this would provide enough space for the rapidly developing MCM and potentially ASW off board systems now or in 20 years time.

Also is a 20m beam enough to ensure reliable operation in all sea states if the kit continues to get larger and heavier?

A 24m+ beam or a well dock would seem preferable IMO.
Top

Too much speculation going on for a news only topic. Please take those sorts of discussions to the escorts general discussion topic.
Twitter: @UKDefenceForum

donald_of_tokyo wrote: For example, I can see the engine room of IH-class LOOKS LILE a bit taller than that of Absalon class. It will be just difference in arrangement, but as the deck height is taller in IH-class, it is natural.

Watch from 7:00 for design thinking which includes both a built in crane and monorail in the engine room.

That was a really interesting interview. It looks like they very carefully thought out their requirements beforhand, in some detail. I hope that someone at Babcock is capable of doing such a similar detailed prep work on T31 and T32.
Top
Post Reply
62 posts