Contains threads on Royal Navy equipment of the past, present and future.
Post Reply
12810 posts

Not going to be doing any manoeuvres without massive air power, its an integral part.
@LandSharkUK
shark bait

downsizer wrote:Hypothetical fantasies aside, I'd love to know when posters realistically think we're launching an airborne assault of ~900 people?

No need, if it starts down that road i will slot that mad nazi bitch and resume the role of steward. We as a family did do that for a while until ed ned decided to fulfil his imperial ambition.
jimthelad

Aethulwulf wrote:You said the LPH would come at the expense of the LPDs. Without the LPDs, how are the LCUs going to available?

Generally speaking the discussion is short of measures for capacity EQUALS individual capacities TIMES their respective turnaround times (where the distance over which the turnarounds are to be achieved is dictated by CONOPS) - hence the LPDs will be part of the equation for a long time to come, even though aesthetically more appealing ship designs have appeared
ArmChairCivvy

I don't think the 900 includes the air group.

Tight squeeze. Rather him than me.
Ron5

Further denial of the 'mothball story;

The Ministry of Defence (MoD) has insisted it is "fully committed to operating" both new Royal Navy aircraft carriers following speculation over their future. The statement comes after a shipbuilding union called for "urgent clarification" over reports that one of the carriers could be mothballed to help address a £500 million budget shortfall.

Workers at Rosyth in Fife and other yards across the UK are currently manufacturing the Queen Elizabeth Class carriers, HMS Queen Elizabeth and HMS Prince of Wales, and have commitments to maintain the vessels throughout their lifetime.The GMB union said "alarm bells are ringing" among members at the suggestion future work could be reduced.It follows a report in The Times that the Royal Navy is trying to save £500 million over the next two months after "wasting money on ships it did not need".

Other options suggested include cutting the size of the Royal Marines, and a failure to meet the budget shortfall would mean the Army, Royal Air Force and Joint Forces Command will be asked to bail the Navy out, the Times reported.GMB Scotland Organiser Gary Cook said: "The mere suggestion that one of the aircraft carriers could be mothballed by the MoD will set alarm bells ringing among our members and particularly in Rosyth.

"A large chunk of the future prosperity of these yards are invested in the maintenance and routine refitting work associated with Royal Navy vessels and potentially cutting this work by 50% would have serious consequences for jobs.

"GMB is also campaigning to bring the manufacture of three Royal Fleet Auxiliary support vessels to yards across the UK and any impact on the future of QE class carriers would also call into question the future outlook for these orders too.

"Less than two months since the Parker Report spelled out the massive economic and employment opportunities for shipbuilding in the UK, it's deeply worrying that the MoD is flirting with proposals that could harm our shipbuilding communities.

"Such short-sightedness would be bad news for Rosyth, bad news for Scotland and bad news for the future of UK shipbuilding and we are calling on the UK Government to provide urgent clarification on these reports."

An MoD spokesman said: "We are fully committed to operating both HMS Queen Elizabeth and HMS Prince of Wales and to naval shipbuilding on the Clyde.

"The Defence Secretary confirmed last year that steel will be cut on the first anti-submarine Type 26 Frigate this summer, providing warship building work on the Clyde until 2035.

"Britain has the largest defence budget in Europe and it is growing as we invest £178 billion pounds in new ships, submarines and aircraft over the next decade."

HMS Queen Elizabeth is due to sail from Rosyth ready to conduct sea trials this summer.

Pongoglo wrote:HMS Queen Elizabeth is due to sail from Rosyth ready to conduct sea trials this summer.

If the Rosyth Dry dock is going to be used in the 2020s to take apart old SSBN and SSN where are the QEC class going for refits?
hovematlot

Rosyth has more than one dry dock.
shotleylad

They've already started disposal in the Adjacent dock, presumably it will stay there and keep the big dock free if its ever needed.

Cammell Laird are also exploring building a dock big enough for QE. If neither of those work out their are floating dry docks big enough to fir QE in that could be hired when needed.
@LandSharkUK
shark bait

Only Dock 1 is large enough for a QEC. I remember reading (somewhere) that a drydock in France would be the next nearest option.
SKB 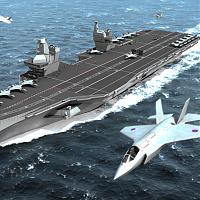 
apologies if already posted.
QEC Eye in the SKY

Thales press release.... I am still strying to find out how many sets will be delivered... but can't seem to reach Thales right now

Thales and Lockheed Martin announce the contract award to deliver the Royal Navy’s new airborne surveillance and control system, under the ‘CROWSNEST’ programme. Lockheed Martin, who acts as the Ministry of Defence’s prime contractor for the Merlin helicopter, selected a new generation of the Thales Searchwater radar and Cerberus mission system to be fitted to existing Merlin Mk2s helicopters to provide the Navy with an airborne surveillance and control capability (ASaC).

In the bidding stages it was 10 - may have changed.

Ten, as in 3 as the minimum to have 24/7 coverage, one more for deeper maintenance. at times.

2 more, one for new crews going through on-shore training; the other as a write-off reserve?

So, 6 Type 45 destroyers ( each with 1 Merlin ) plus say 13 frigates ( each with 1 Merlin ) plus 1 carrier ( with 10 Merlins- 4 ASW, 4 AEW, 2 SAR )- that's about 29 Merlins. And there's 30 Merlin's HM2. And I even didn't mention an 3-4 Merlins for Tide-class or Fort Victoria-class....
Fortune favors brave sir, said Carrot cheerfully.
What's her position about heavily armed, well prepared and overmanned armies?
Oh, noone's ever heard of Fortune favoring them, sir.
According to General Tacticus, it's because they favor themselves…
abc123

The T45 wont routinely embark a Merlin, and the Auxiliaries would likely take the Commando version for general utility work, of which there are plenty.

The HM2 split is 30 in service, 5 in maintenance, 14 for the carriers, 11 for the frigates. They will draw from a common pool, but I believe the squadrons will be dedicated to either carrier or frigate operations.
@LandSharkUK
shark bait

taking another type of helo!

SB, why 11 when only 1 is in refit, at a time, and then later, probs, only one is being decommisioned, at a time,,,?
ArmChairCivvy

I think 829 Sqn (the small ship squadron) only has 6 Merlin. These aircraft are dedicated to the deep ASW Type23s. All of the rest of the Frigates and Destroyers have Wildcat.
Biggles

No squadron actually has aircraft, but may have around 6 allocated to it some times.

829 Sqn will merge with 814 Sqn and be dedicated to the frigates.

849 NAS will swap from Sea King to Merlin and be dedicated to AWE on the carriers.
820 are on (were on) HMS Ocean, returning to a carrier based squadron which will focus on ASW

It makes sustaining a strong Merlin presence on the carriers difficult, although the 14 figure was quoted as a max effort figure, not a sustainable figure.
@LandSharkUK
shark bait

just thinking by the time POW comes into service wont QE be ready for her first refit , so pushing back by a few more years the time when 2 ships worth of crews and squadrons need to be found .
PAUL MARSAY

One thing I have been wondering is why there is 2 different deck designs for QE and PoW i.e the angled deck edge on PoW.

Why was this not incorporated on the QE deck design ?

Iv been looking to try and see if there was any reason for but havnt had any luck, could anyone enlighten me on this ?
Jake1992

PoW doesn't have an angled deck, she's identical to the QE
SKB

I know the angled runway on the flight deck won't be on either of them but the angle st the front of PoW is different to QE why is this ?
You do not have the required permissions to view the files attached to this post.
Jake1992
Post Reply
12810 posts

Users browsing this forum: No registered users and 45 guests