Contains threads on Royal Navy equipment of the past, present and future.
Post Reply
693 posts

SW1 wrote: If the capacity and costs in the next 20 years ends up residing solely with defence it will not be sustainable

- looks like my comment on how France has done it better (so far) went by the wayside
- other than personnel with appropriate scientific background and more specific training, the silos have been there and the change will not be drastic ( cost wise)

Fuel in - how you use it (= how you design your reactor) - how you dispose of the spent fuel (assuming you don't want to have an ever-increasing warhead stockpile)
- that's your 'bigger picture' for national decision making
- then you also have the boats themselves: Osborne resided over the whole-of-life costing of purchasing decisions; there was a certain year (for passing the Maingate) when that criteria set became mandatory; he did not want to breach his 'own' laws s he thought he would be in "the seat" for longer... may be even become the PM; just guess where the extra £10 bn contingency came from, very soon after the MG had been passed. TIP: relates to the discussion above
ArmChairCivvy

ArmChairCivvy wrote:- compare the 40% for Saab's new fighter (made in Sweden) against the Typhoon's 25-ish % (made in the UK)

Typhoon workshare is 37.5% for the UK. In reality its probably a fair bit north of that due to the RAF's funding of improvements that others have to adopt on new builds.
Timmymagic

For the sake of this "argument" let's call it 40% for both
- the argument being that the ' hypothetical' sub could go North of that... easily

Could be the first SSK in the world with a 'sensing skin' AKA the way sensors are laid out on A-boats, for the best result
ArmChairCivvy

How has the fingers in the ears, head in the sand we want more money campaign gone for defence these past 40 years.

You tell me! You are tthe one who is saying that enough is being spent on defence, or do you think that it is it more than enough?

Just because at first you don't succeed, it does not mean that you are taking the wrong actions. More likely that you have to continue to forcibly remove the cotton wool from the ears of the politicians and not offer them succour for their unrealistic expectations of the "piss dividend".
Scimitar54

Poiuytrewq wrote:Sounds good but it should include the option for an additional 3 boats if RN are happy with the performance of the design and dependant on the first batch being delivered on time and on budget.

I'd cap it at four. The SSKs should have a very limited role, any additional money should be spend on SSNs. IMO

shark bait wrote:Yes they could do that, but why is that better than aircraft or surface craft?

It's not better than, just in addition to. The SSK also has better persistence and more powerful passive sensors. There is an intelligence gathering aspect to it too. If our SSK picked up the trail of a nosy Russian submarine it could potentially track it undetected to gather intel. If you have a Merlin or P8 dropping active sonobuoys, it kind of gives the game away. We have too few ASW escorts and P8s that an SSK can provide an additional resource. This role would be in addition to its local patrol and training one which will free up Astutes to go global. The addition of SSKs is more about maximising the potential of the Astutes, not hindering their use.

RetroSicotte wrote:Suddenly you have a "second class" of submariner who can only work one type of boat.

I think of it more as carreer progression. Certain roles types can go between sub types with normal training (granted, engineering would be more difficult) and Submariners are generally pretty intelligent types, have worked with a few and got one in the family. We also transfer people between surface ships without too much issue....

PapaGolf wrote:I'd cap it at four. The SSKs should have a very limited role, any additional money should be spend on SSNs. IMO

I don't disagree. Four SSK's for patrolling around the UK seems like a reasonable number. I also think the case for an additional 2 SSK's operating in the Med from Gibraltar should be considered carefully.
Poiuytrewq

If there was new money to boost submarine detection around the UK, why is an SSK the best way to go? Why does the it need to be covert if operating around friendly shores?
@LandSharkUK
shark bait

If any money comes available it would be better spent when I think about it, on an either Astute to meet the minimum number that we need to meet commitments.
Lord Jim

Another Astute is almost impossible, can't just pop out an buy an extra nuclear reactor, capacity is planned years in advance and will soon be producing the next generation.
@LandSharkUK
shark bait

Tempest414 wrote:For me if new money came up for Subs then I would go for 4 SSK's 2 in the MED and 2 in the Gulf there by freeing up the SSN's for the Carrier group and Atlantic

Better spent on more MPAs and escorts then. SSKs really aren't worth a lot to the UK's requirements. Too inefficient and single purpose vs money being spend on multipurpose things that also cover the same area.
RetroSicotte

I did say if the money was for new Subs. this being said they do have a low crew footprint when put next to MPAs and Frigates and just knowing they are operating in the region gives others a problem . they could come in handy along side the new LSS
Tempest414

It is not submarines (SSKs for that matter) that we are short of (as primarily coastal assets) in the N. Atlantic/ Baltic area, in addition to ours here's an overview
- I fully support the comment made, of putting our limited budget into multi-purpose assets
ArmChairCivvy

shark bait wrote:If there was new money to boost submarine detection around the UK, why is an SSK the best way to go? Why does the it need to be covert if operating around friendly shores?

Not if there was new money, I can't see the submarine budget getting increased substantially to make a difference to fleet numbers. The question is, how can we do more with the budget we have? My thoughts are more along the lines of trying to establish and maintain a healthy and sustainable submarine fleet that looks at the various capabilities, requirements and training needs (inexperienced crews and ASW training). It should also take into consideration industrial requirements (design and build) too.

As I said previously, it's not going to happen this time round but should we have design or build delays for future SSNs or SSBNs, having a SSK design ready to go would keep skills fresh and deliver "something" to the RN.

If new money was found and we could build 9 SSNs then I think the question of SSKs would not be discussed.
PapaGolf

In this case it is not only a function of money. Rolls Royce don't have a bunch of engineers sat around waiting for another order to come in, neither can they quickly train new people, neither can the hire contractors. The limiting factor is industrial capability which has already been set.

RetroSicotte wrote:Better spent on more MPAs and escorts then. SSKs really aren't worth a lot to the UK's requirements. Too inefficient and single purpose vs money being spend on multipurpose things that also cover the same area.

In general the RN would see a far greater return investing in other sub hunting assets. Submarines specifically for operations in local waters is dumb, there is very little need to be stealthy operating in home waters.

However if they could prove a few SSK's could be used to increase Nuke boat on station time, mostly by taking over training roles, then perhaps then it could be a worth wile expenditure.
@LandSharkUK
shark bait

shark bait wrote:However if they could prove a few SSK's could be used to increase Nuke boat on station time, mostly by taking over training roles, then perhaps then it could be a worth wile expenditure.

Are those flowers still there, centre of the roundabout?
ArmChairCivvy

It's a fantastic British success story, and although BAE comes in for lots of criticism at home it appears many abroad take a very different view.
Poiuytrewq

Then again they had to go to the Americans to get the programme on track as they were totally up the creek trying to bring in new design techniques when they weren't ready or had the trained personnel. It was an absolute mess until the American arrived.
Lord Jim

Lord Jim wrote:It was an absolute mess until the American arrived.

Another good example of the importance of maintaining a sovereign ability to produce what the UK's needs when the UK needs it. Has the lesson been learned?
Poiuytrewq

It's a fantastic British success story, and although BAE comes in for lots of criticism at home it appears many abroad take a very different view.

Naval technology is UK based.

PS the article was absurd.
Ron5

PS the article was absurd. 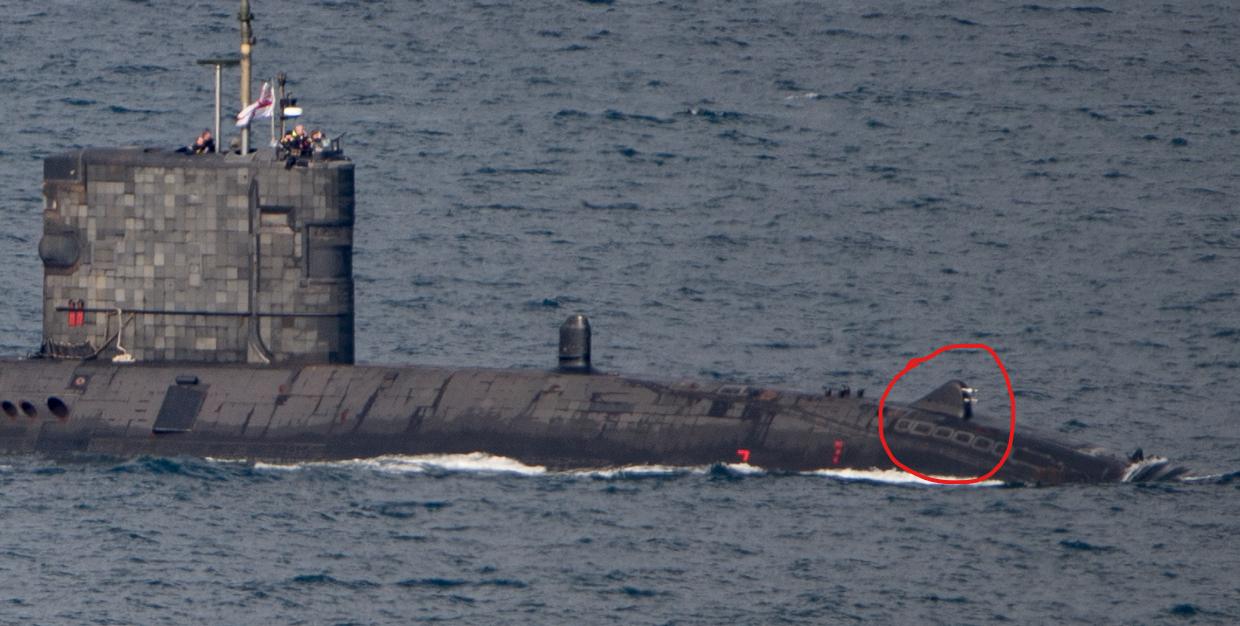 Likely the wake detection trailed on a T-boat a couple of years ago.
@LandSharkUK
shark bait

Interesting that they went with a new fin to house it.
Halidon
Post Reply
693 posts

Users browsing this forum: No registered users and 34 guests