Contains threads on Royal Navy equipment of the past, present and future.
Post Reply
3152 posts

CO of HMS Medway says
- 50% of the crew has never actually deployed before (and thus excited) : it means a half of the crew are new comer?
- HMS Medway is a contingency for HADR there: does this confirm that there will be another = primary HADR asset there?

PS RichardIC-san. Using shore based crane is no problem I think. The crew will be fairly busy preparing for deployment, and just asking a help for an hour of one of the many crane-handers at the port is understandable.

PS2 RichardIC-san. "Well at least a helicopter has now actually landed on a River. Up until now the pad has been nothing but a winching spot.". Actually, it was on September 2019 on HMS Medway (*1).

Tempest414 wrote:great pic's above of the containers fitted shame she is not carrying a UAV to help give eyes on over the Horizon for anti drug or recon op's

It's not only River B2. All RN asset lacks UAVs. But, in other words, once a UAV type is selected, many of the RN assets, including River B2 will carry it.

By the way, I happen to find good "manned" helicopter.

How about EC145 T2, upgraded with "five bladed" rotor? A new plan to be certificated this spring, and be on sale within year. (See https://www.verticalmag.com/news/airbus ... 45-upgrade )

Importantly,
1: the blade is "foldable". Of course, manually, but it becomes very compact, as small as 11.7 x 2.7 x 4.0 m.
2: it also provides "another 150 kg" of useful loads.
3: the new "five (foldable) blades" system can be retrofitted to existing EC145T2s, also used in the UK "Defence Helicopter Flying School" (so the logistic problem is not large (anyway it is very popular helicopter and maintenance system surely exists around Caribbean sea.))

Looking at the River B2's waist, I guess adding a fixed, 12 m long, 4.5 m wide, and 4.5 m high hangar is doable. Also, UK can either ADD a few "new EC145T2 with five bladed rotors", or even PFI it, for operating onboard River B2. We do not need a fully equipped expensive Wildcat for APT(N). As EC145 is small, its maintenance load and operation crew will be not so large, and anyway will fit within the 50 troops accommodation area. EC145 can carry sniper (manned) and can be used for SAR operations as well as HADR.

The hanger, when not used, can be any kind of "garage" to carry ORC boats, USV/UAV/UUVs, or just for store.

Just a fantasy, I agree, but how about adding the hangar on hull 4 and 5 of River B2? 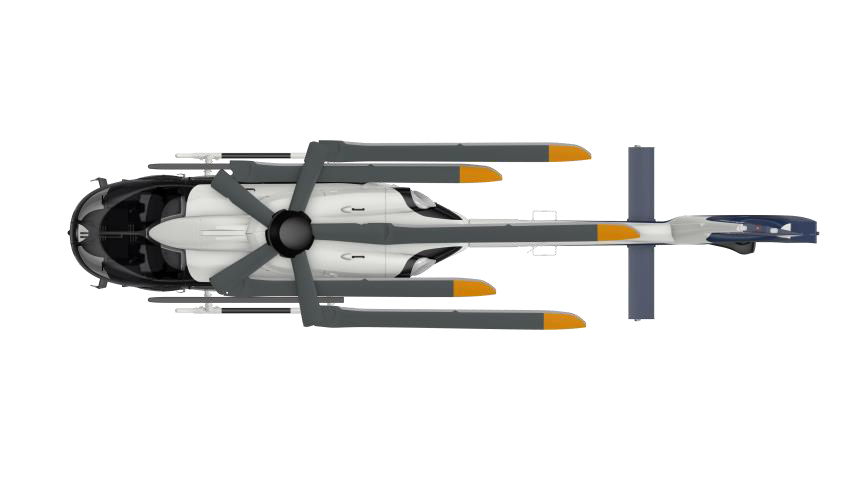 this is a camcopter operating from a B2 skip to 2,18 gives some idea of the type use it can bring
Tempest414

SKB wrote:EC145 is already used for services helicopter training, where its known as the H-145 Jupiter. Similarly, they also operate EC135 as H-135 Juno.

Thanks, I knew it. My point was the "folded rotor" coming soon. If similar technology adapted for EC135T2 as well, it will be a better candidate for light utility. Simply because it is small, but can fly with a few men onboard.

Another idea will be Bell-407 with MQ-8C's folding rotor (can be as short as 10.7m long in hangar, while Bell 407's original folding rotor does not shorten its 12.6 m length). IF RN buys MQ-8C (expensive) for high-end assets (escorts), they can share significant fraction of logistics.

Tempest414 wrote:this is a camcopter operating from a B2 skip to 2,18 gives some idea of the type use it can bring

Thanks. Hmm, actually, not that impressive, partly because it is of 2014 movie? (Here is 2019 version on Finnish Coast Guard cutter: "https://youtu.be/IN_Nfn8JBIc")
Modern drone technology is growing fast. So, may be RN shall start from leasing some (say, CAMCOPTER S-100) for 5 years or so. Leonardo AWHero, on which UK's MOD has shown interest(?), is the same size/weight/endurance class as for CAMCOPTER. Anyway, gaining "know-how of rotorcraft UAV on ship" will be important.
donald_of_tokyo

Don't know about the fire scout being expensive, it sure brings a lot to the table. Probably better justified on a type 26 or 31 tho.
Ron5

donald_of_tokyo wrote:Just a fantasy, I agree, but how about adding the hangar on hull 4 and 5 of River B2?

A light helo and hanger should have been there at the beginning, that would have been a real step up over its predecessor. Is there an 'easy' way to retrofit it?

Tempest414 wrote:this is a camcopter operating from a B2 skip to 2,18 gives some idea of the type use it can bring

What can it bring? I'm always underwhelmed by camcopter, it looks like a camera on a drone, something available on Amazon.
@LandSharkUK
shark bait

donald_of_tokyo wrote:Just a fantasy, I agree, but how about adding the hangar on hull 4 and 5 of River B2?

A light helo and hanger should have been there at the beginning, that would have been a real step up over its predecessor. Is there an 'easy' way to retrofit it?

Note that 20ft ISO container typically weighs 3.5 t dry, and up to 28-30t fully loaded. River B2 is designed to carry 6 of them (although may not be fully loaded).

On its weight, those helicopters is only 3-4 t. Including maintenance jigs, total amount will be 6-8 t (guesstimate). The hangar structure will weigh, say 8-16 t or so.

Therefore, I think "adding a fixed hangar with 12x4x4 m3 size" is doable also in weight.

The main issue will be the helicopter itself. Wildcat needs ~16 m long hangar, which cannot fit on River B2 (if not telescopic *1). It is also expensive, can carry powerful weapons (=more expensive). So, not an option for me for River B2. Also, majority of OPVs never need helicopter hangar, because in most of the case, land-based air-cover is expected. In other words, "light utility helicopters for some of the River B2s" does not need to be many. Only 4 or 5 helicopter is enough for, say, 2 River B2 OPVs to have a hangar. Not good for logistics. Hence, EC135T2 or EC145T2 already in UK helicopter school, or MQ-8C/Bell 407 to be adopted also as a long-range rotary wing UAV, is my suggestion...

*1 Actually, lack of folding tail limits the utility of Wildcat significantly, I think...

[EDIT] Also, in relatively small ships as River B2, helicopter operation efficiency is low. So, locating an expensive and human-resource intensive helicopter may not pay well. It must be simple and low man-power to operate, and cheap to buy.
donald_of_tokyo

It comes down to money and tasking what do you see a MQ8c doing on a B2 River and when it comes to cost for same money as 5 MQ8c,s you could have 2 x Hero/ Camcopters on 45 ships in the fleet. don't get me wrong MQ-8c is a good bit of kit but is it over kill for a B2
Tempest414

That would be a decent choice for the Caribbean region. Cayman operates an EC145 (the UK provided 25% of the purchase cost under an initiative to develop disaster preparedness in the region) and are purchasing a second, to replace the old Police EC135 that took a chunk out of the runway at Owen Roberts early last year (no serious casualties, fortunately). They can handle routine maintenance on-island, but major services have to be done in Florida and take around two to three months. I suspect that it would need some additional equipment over and above the training versions (flotation devices, searchlights, public address, FLIR and a stabilised 50 cal sniper mount come to mind...), but they would be supportable in the region, even if not permanently based onboard.
The pessimist sees difficulty in every opportunity. The optimist sees the opportunity in every difficulty.
Winston Churchill
Caribbean 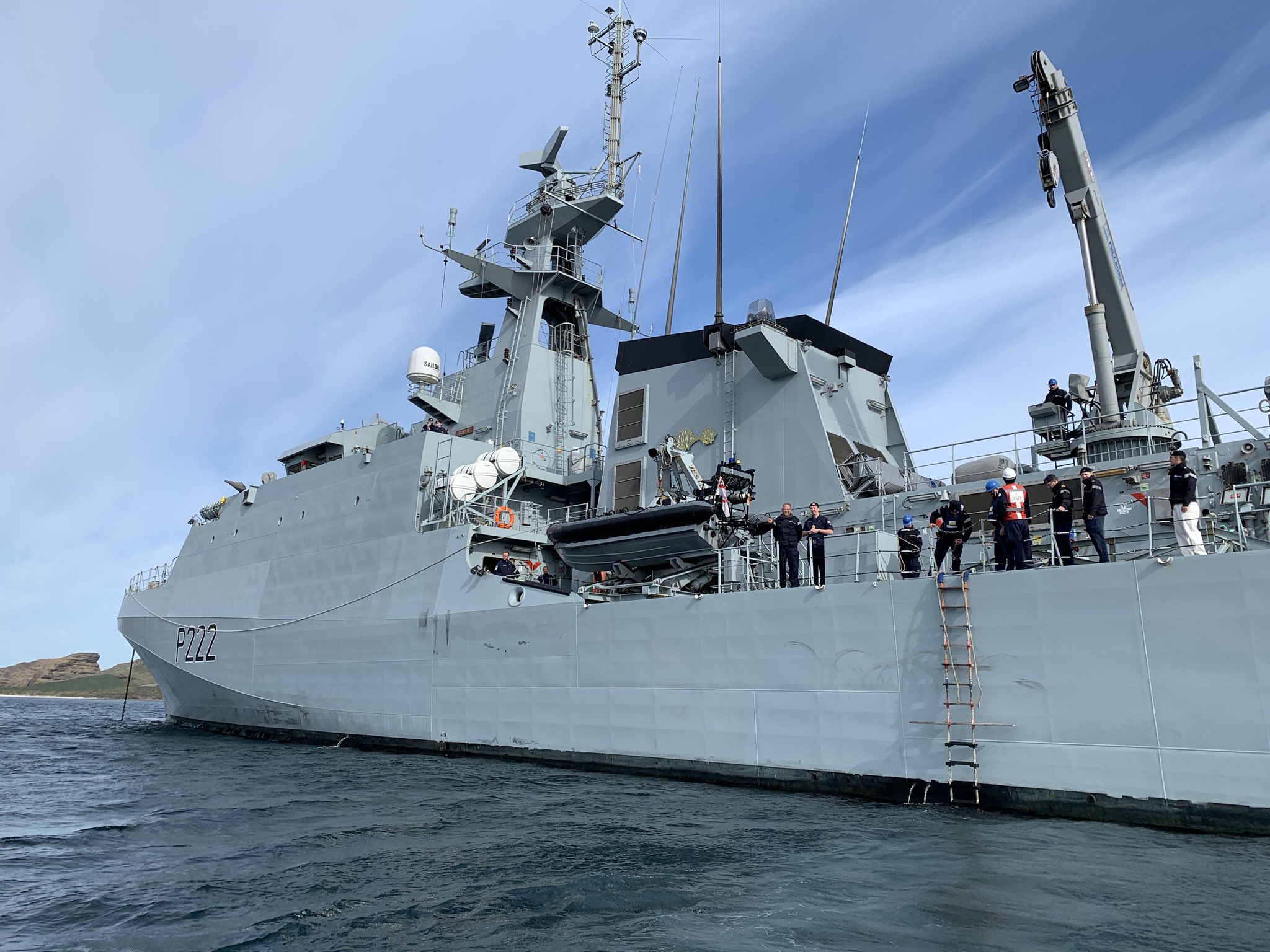 Looks like the "cargo" HMS Forth's 16t crane was handling was the RM's Rigid Raider craft.
So, at this trip, she was carrying at least two 7.5m RHIBs and a RRC (or 2). 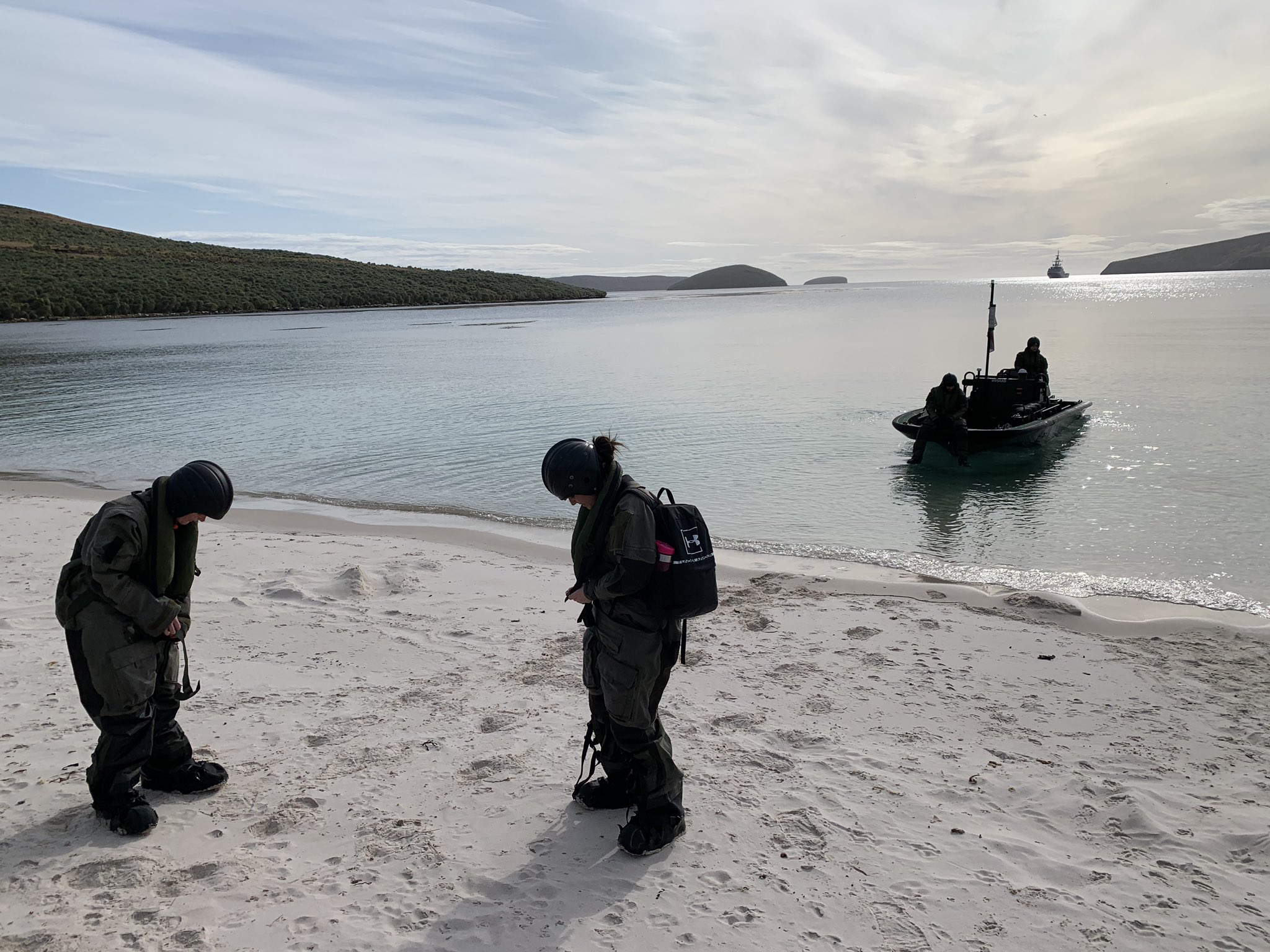 I saw HMS Trent on Friday waiting in the Solent before she came into Portsmouth harbour in the evening.

It struck me that even from a distance the Batch 2 River Class is a handsome design which reminded me of the Type 21 frigates.

HMS Forth carries ~50 troops, as planned. I'm wondering how their boats are handled. Or this time, only embarking?

Good article, although the photo is wrong/misleading ...

Navy lookout report: "https://twitter.com/NavyLookout/status/1224295204938829824"
NavyLookout : 40 Grenadier Guardsmen joined @HMS_Forth in the Falklands for exercise.
Batch II OPVs have dedicated mess (under flight deck) with bunks, galley, toilets and showers for up to 51 troops
(Another 50 personnel could also be accommodated on camp beds)

Great to see the Troops accommodation is utilized as planned. 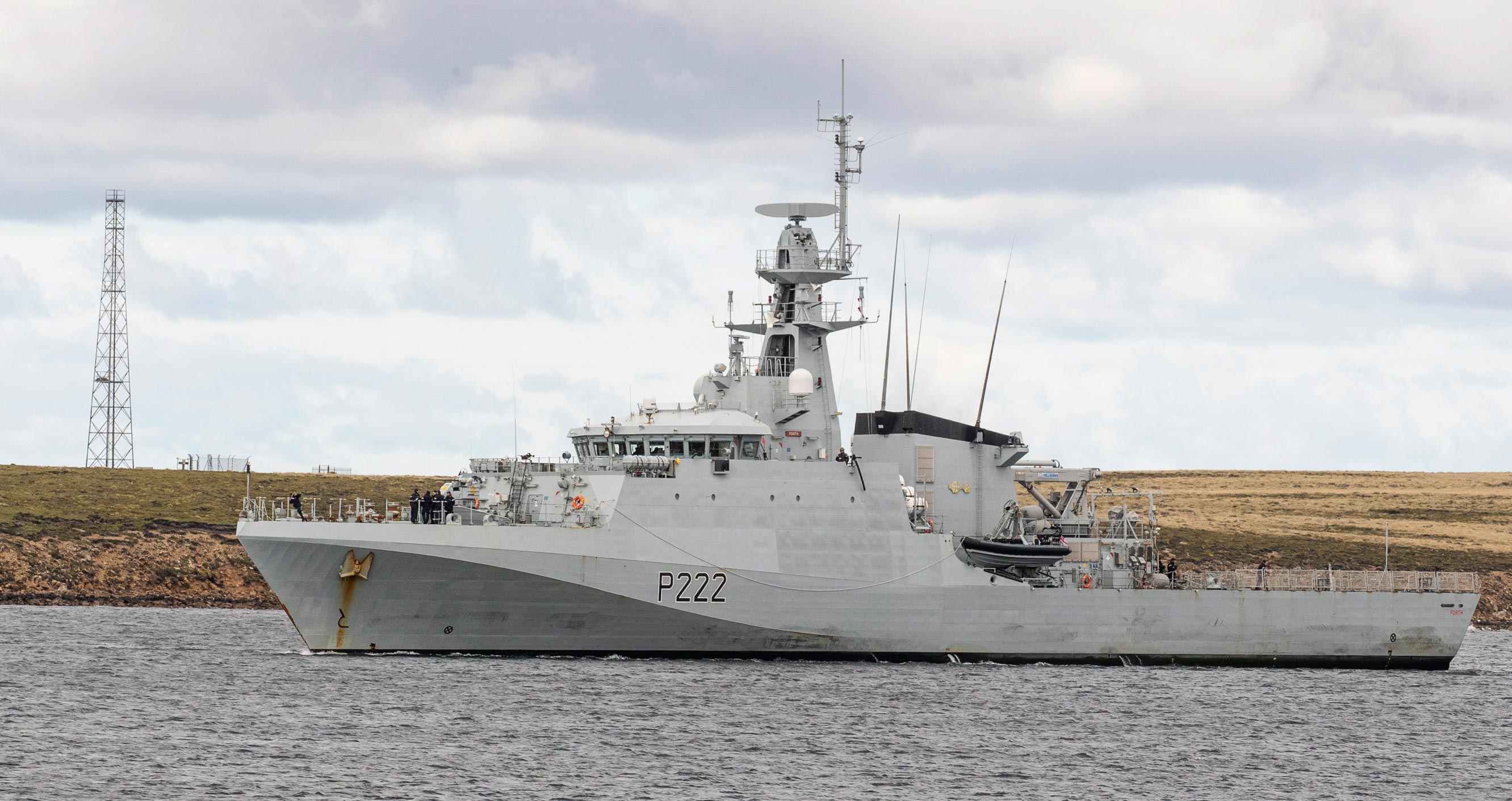 Interesting new article on potential upgrades for Batch 2 from @NavyLookout

Nothing that hasn't really been discussed here but brings it together in one place.

"Goodbye and thank you to the @GrenadierGds and hello to the @1_Rifles!" Looks like British Army in Falkland is trying hard to learn how to use this new asset. 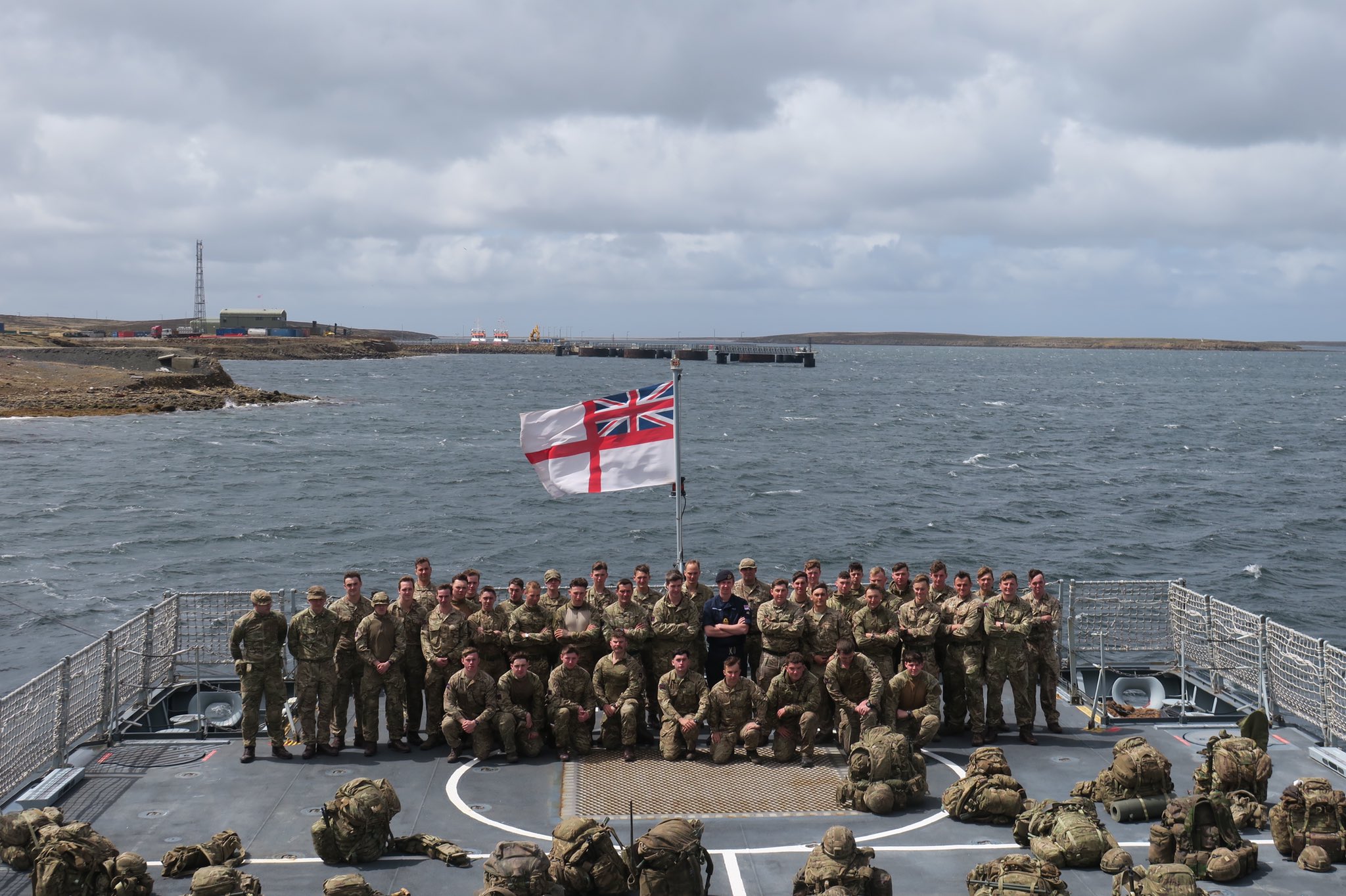 Naval shipbuilder Bangkok Dock and the Thai Ministry of Defence’s (MoD’s) Defence Technology Institute (DTI) have signed an agreement to collaborate on meeting a requirement in the Philippines to procure offshore patrol vessels (OPVs), Jane’s has learned.

Under the memorandum of agreement (MOA), which reflects growing efforts to expand defence industrial collaboration across Southeast Asia, the Thai partners will look to position for the Philippine Navy (PN) a modified version of the 90 m OPV that Bangkok Dock is building for the Royal Thai Navy (RTN).

This vessel is based on BAE Systems’ 90 m OPV, the design for which the RTN acquired from the UK-headquartered defence group in 2009.

According to a statement provided to Jane’s, the Bangkok Dock-DTI MOA will support the implementation of the OPV project with the PN acting as project administrator. The MOA was signed in Bangkok in January by Air Chief Marshal Preecha Pradabmook, the Director General of the DTI, and Rear Admiral Ake Sarasas, the Managing Director of Bangkok Dock.

With work undertaken at the RTN’s Mahidol Adulyadej Naval Dockyard in Sattahip, Bangkok Dock commissioned the first 90 m OPV for the RTN in 2013, and the second was launched in September 2019. Contracts to build additional vessels for the RTN are expected in the next few years. Versions of the River-class OPV are also in service with the UK Royal Navy and the Brazilian Navy.

The Philippine Navy (PN) has outlined a requirement to procure six OPVs, although follow-on orders are expected over time. The OPV procurement was approved by Philippine President Rodrigo Duterte in June 2018, with a budget of about PHP30 billion (USD577 million).

To meet the PN requirement, Bangkok Dock and the DTI are proposing an OPV design similar to vessels being acquired by the RTN.
RichardIC

Fishing has been a way of life in the waters around the United Kingdom for centuries. The Royal Navy has a role to police British and European fishermen and women in UK waters. It is the duty of those sailors enforcing the law to know everything about fish.

Reporter's opening comment "An island nation surrounded by the sea." , almost as stupid as Australia's anthem line, "Our home is girt by sea."

Users browsing this forum: No registered users and 15 guests